For Use In Dogs Only

A diuretic-saluretic for prompt relief of edema
Caution: Federal law restricts this drug to use by or on the order of a licensed veterinarian.

Furosemide is a chemically distinct diuretic and saluretic pharmacodynamically characterized by the following:

1.A high degree of efficacy, low-inherent toxicity and a high therapeutic index.
2.A rapid onset of action of comparatively short duration. 1-2
3.A pharmacologic action in the functional area of the nephron, i.e., proximal and distal tubules and the ascending limb of the loop Henle. 2-4
4.A dose-response relationship and a ratio of minimum to maximum effective dose range greater than ten fold. 1-2
5.It is administered orally. It is readily absorbed from the intestinal tract and well tolerated.

This product contains alcohol 11.5%, USP as a preservative, and FD&C Yellow #6 and D&C Yellow #10 as color additives.

Furosemide, a diuretic, is an anthranilic acid derivative with the following structural formula: 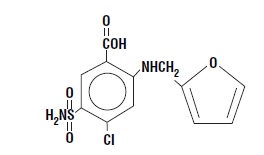 The therapeutic efficacy of Furosemide is from the activity of the intact and unaltered molecule throughout the nephron, inhibiting the reabsorption of sodium not only in the proximal and distal tubule, but also in the ascending limb of the loop of Henle. The prompt onset of action is a result of the drug's rapid absorption and a poor lipid solubility. The low lipid solubility and a rapid renal excretion minimizes the possibility of lipid accumulation in tissues and organs or of crystalluria. Furosemide has no inhibitory effect on carbonic anhydrase or aldosterone activity in the distal tubule. The drug possesses diuretic activity in the presence of either acidosis or alkalosis.1-7

Dog: Furosemide is an effective diuretic possessing a wide therapeutic range. Pharmacologically it promotes the rapid removal of abnormally retained extracellular fluids. The rationale for the efficacious use of diuretic therapy is determined by the clinical pathology producing the edema.

Furosemide Syrup 1% may lower serum calcium levels and cause tetany in rare cases of animals having an existing hypocalcemic tendency.10-14

While it has not been reported in animals, the use of high doses of salicylates, as in rheumatic diseases, in conjunction with Furosemide Syrup 1% may result in salicylate toxicity because of competition for renal excretory sites.

Electrolyte balance should be monitored prior to surgery in patients receiving Furosemide Syrup 1%. Imbalances must be corrected by administration of suitable fluid therapy.

Furosemide Syrup 1% is contraindicated in anuria. Therapy should be discontinued in cases of progressive renal disease if increasing azotemia and oliguria occur during the treatment. Sudden alterations of fluid and electrolyte imbalance in an animal with cirrhosis may precipitate hepatic coma; therefore, observation during period of therapy is necessary. In hepatic coma and in states of electrolyte depletion, therapy should not be instituted until the basic condition is improved or corrected. Potassium supplementation may be necessary in cases routinely treated with potassium depleting steroids.

Furosemide Syrup 1% is a highly effective diuretic and, as with any diuretic, if given in excessive amounts may lead to excessive diuresis that could result in electrolyte imbalance, dehydration and reduction of plasma volume, enhancing the risk of circulatory collapse, thrombosis, and embolism. Therefore, the animal should be observed for early signs of fluid depletion with electrolyte imbalance, and corrective measures administered. Excessive loss of potassium in patients receiving digitalis or its glycosides may precipitate digitalis toxicity. Caution should be exercised in animals administered potassium-depleting steroids.

It is important to correct potassium deficiency with dietary supplementation. Caution should be exercised in prescribing enteric-coated potassium tablets.

Human patients with known sulfonamide sensitivity may show allergic reactions to furosemide; however, these reactions have not been reported in animals.

Sulfonamide diuretics have been reported to decrease arterial responsiveness to pressor amines and to enhance the effect of tubocurarine. Caution should be exercised in administering curare or its derivatives to patients undergoing therapy with Furosemide Syrup 1% and it is advisable to discontinue Furosemide Syrup 1% for one day prior to any elective surgery.

The usual dose of Furosemide Syrup 1 % is 1 to 2 mg/lb body weight (approximately 2.5 to 5 mg/kg). Administer once or twice daily at 6- to 8-hour intervals orally. A prompt diuresis usually ensues from the initial treatment. Diuresis may be initiated by the parenteral administration of furosemide injection and then maintained by oral administration.

The dosage should be adjusted to the individual's response. In severe edematous or refractory cases, the dose may be doubled or increased by increments of 1 mg/lb body weight. The established effective dose should be administered once or twice daily. The daily schedule of administration can be timed to control the period of micturition of the convenience of the client or veterinarian. Mobilization of the edema may be most efficiently and safely accomplished by utilizing an intermittent daily dosage schedule, i.e., every other day or 2 to 4 consecutive days weekly.

Diuretic therapy should be discontinued after reduction of the edema, or maintained after determining a carefully programmed dosage schedule to prevent recurrence of edema. For long-term treatment, the dose can generally be lowered after the edema has once been reduced. Re-examination and consultations with client will enhance the establishment of a satisfactorily programmed dosage schedule. Clinical examination and serum BUN, CO2 and electrolyte determinations should be performed during the early period of therapy and periodically thereafter, especially in refractory cases. Abnormalities should be corrected or the drug temporarily withdrawn.

One (1) to two (2) mL (10 to 20 mg furosemide) per 10 lb body weight (approximately 2.5 to 5 mg/kg). Administered once or twice daily, permitting a 6- to 8-hour interval between treatments. In refractory or severe edematous cases, the dosage may be doubled or increased by increments of 1 mg/lb body weight as recommended in preceding paragraphs, "Dosage and Administration."


*Note: The lower oral LD50 value for the rat was obtained in a group of fasted animals; the higher figure is from a study performed on fed rats.


Toxic doses lead to convulsions, ataxia, paralysis and collapse. Animals surviving toxic doses may become dehydrated and depleted of electrolytes due to the massive diuresis and saluresis.

Reproductive studies were conducted in mice, rats and rabbits. Only in rabbits administered high doses (equivalent to 10 to 25 times the recommended average dose of 2 mg/kg for dogs, horses and cattle) of furosemide during the second trimester did unexplained maternal deaths and abortions occur. Furosemide should be used during pregnancy only if the potential benefit justifies the potential risk to the fetus. The effects of alcohol administered to pregnant Beagles at 3 and at 3.6 gms/kg/day throughout gestation suggests that alcohol may reduce the number of offspring per litter, the birth weight per pup and increase the incidence of stillbirths. There have been no studies conducted in pregnant dogs administered alcohol at levels found in Furosemide Syrup 1%. 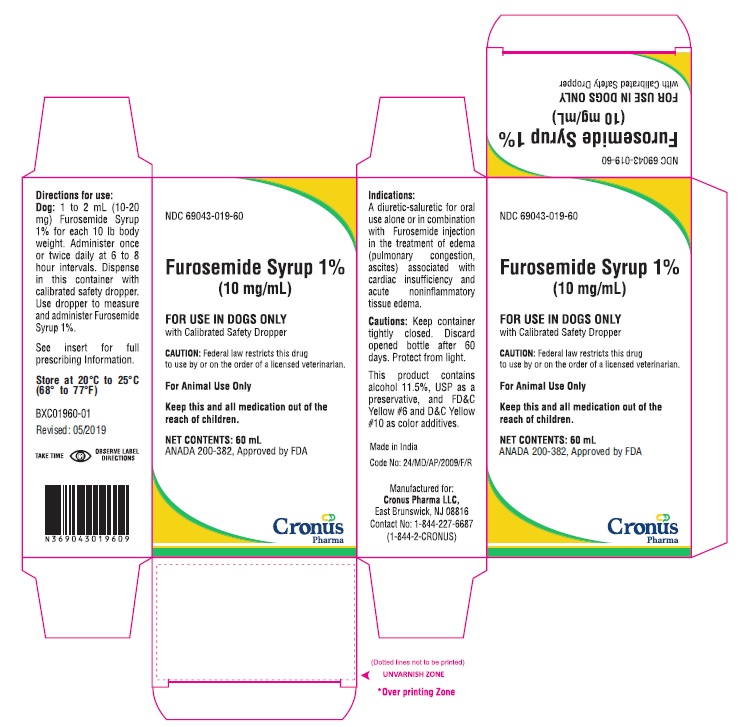