FOR CORRECTION OF METABOLIC ACIDOSIS AND

Solutions are offered in concentrations of 4.2%, 5.0%, 7.5% and 8.4%. See table in HOW SUPPLIED section for contents and characteristics.

Solution in LVP container has 0.9 mg/mL of edetate disodium, anhydrous added as a stabilizer.

The solutions contain no bacteriostat, antimicrobial agent or added buffer and are intended only for use as a single-dose injection. When smaller doses are required, the unused portion should be discarded with the entire unit.

Sodium bicarbonate, 84 mg is equal to one milliequivalent each of Na+ and HCO3¯. Sodium Bicarbonate, USP is chemically designated NaHCO3, a white crystalline powder soluble in water.

Sodium bicarbonate in water dissociates to provide sodium (Na+) and bicarbonate (HCO3¯) ions. Sodium (Na+) is the principal cation of the extracellular fluid and plays a large part in the therapy of fluid and electrolyte disturbances. Bicarbonate (HCO3¯) is a normal constituent of body fluids and the normal plasma level ranges from 24 to 31 mEq/liter. Plasma concentration is regulated by the kidney through acidification of the urine when there is a deficit or by alkalinization of the urine when there is an excess. Bicarbonate anion is considered “labile” since at a proper concentration of hydrogen ion (H+) it may be converted to carbonic acid (H2CO3) and thence to its volatile form, carbon dioxide (CO2) excreted by the lung. Normally a ratio of 1:20 (carbonic acid: bicarbonate) is present in the extracellular fluid. In a healthy adult with normal kidney function, practically all the glomerular filtered bicarbonate ion is reabsorbed; less than 1% is excreted in the urine.

Sodium Bicarbonate Injection, USP is indicated in the treatment of metabolic acidosis which may occur in severe renal disease, uncontrolled diabetes, circulatory insufficiency due to shock or severe dehydration, extracorporeal circulation of blood, cardiac arrest and severe primary lactic acidosis. Sodium bicarbonate is further indicated in the treatment of certain drug intoxications, including barbiturates (where dissociation of the barbiturate-protein complex is desired), in poisoning by salicylates or methyl alcohol and in hemolytic reactions requiring alkalinization of the urine to diminish nephrotoxicity of blood pigments. Sodium bicarbonate also is indicated in severe diarrhea which is often accompanied by a significant loss of bicarbonate.

Treatment of metabolic acidosis should, if possible, be superimposed on measures designed to control the basic cause of the acidosis ― e.g., insulin in uncomplicated diabetes, blood volume restoration in shock. But since an appreciable time interval may elapse before all of the ancillary effects are brought about, bicarbonate therapy is indicated to minimize risks inherent to the acidosis itself.

Vigorous bicarbonate therapy is required in any form of metabolic acidosis where a rapid increase in plasma total CO2 content is crucial ― e.g., cardiac arrest, circulatory insufficiency due to shock or severe dehydration, and in severe primary lactic acidosis or severe diabetic acidosis.

Potassium depletion may predispose to metabolic alkalosis and coexistent hypocalcemia may be associated with carpopedal spasm as the plasma pH rises. These dangers can be minimized if such electrolyte imbalances are appropriately treated prior to or concomitantly with bicarbonate infusion.

Rapid injection (10 mL/min) of hypertonic Sodium Bicarbonate Injection, USP, solutions into neonates and children under two years of age may produce hypernatremia, a decrease in cerebrospinal fluid pressure and possible intracranial hemorrhage. The rate of administration in such patients should therefore be limited to no more than 8 mEq/kg/day. A 4.2% solution may be preferred for such slow administration. In emergencies such as cardiac arrest, the risk of rapid infusion must be weighed against the potential for fatality due to acidosis.

The addition of sodium bicarbonate to parenteral solutions containing calcium should be avoided, except where compatibility has been previously established. Precipitation or haze may result from sodium bicarbonate-calcium admixtures. NOTE: Do not use the injection if it contains precipitate.

Additives may be incompatible. Consult with pharmacist, if available. When introducing additives, use aseptic technique, mix thoroughly and do not store.

The aim of all bicarbonate therapy is to produce a substantial correction of the low total CO2 content and blood pH, but the risks of overdosage and alkalosis should be avoided. Hence, repeated fractional doses and periodic monitoring by appropriate laboratory tests are recommended to minimize the possibility of overdosage.

Inadvertent extravasation of intravenously administered hypertonic solutions of sodium bicarbonate have been reported to cause chemical cellulitis because of their alkalinity, with tissue necrosis, ulceration or sloughing at the site of infiltration. Prompt elevation of the part, warmth and local injection of lidocaine or hyaluronidase are recommended to prevent sloughing of extravasated I.V. infusions.

Should alkalosis result, the bicarbonate should be stopped and the patient managed according to the degree of alkalosis present. 0.9% sodium chloride injection intravenous may be given; potassium chloride also may be indicated if there is hypokalemia. Severe alkalosis may be accompanied by hyperirritability or tetany and these symptoms may be controlled by calcium gluconate. An acidifying agent such as ammonium chloride may also be indicated in severe alkalosis. See WARNINGS and PRECAUTIONS.

Sodium Bicarbonate Injection, USP is administered by the intravenous route.

In cardiac arrest, a rapid intravenous dose of one to two 50 mL vials (44.6 to 100 mEq) may be given initially and continued at a rate of 50 mL (44.6 to 50 mEq) every 5 to 10 minutes if necessary (as indicated by arterial pH and blood gas monitoring) to reverse the acidosis. Caution should be observed in emergencies where very rapid infusion of large quantities of bicarbonate is indicated. Bicarbonate solutions are hypertonic and may produce an undesirable rise in plasma sodium concentration in the process of correcting the metabolic acidosis. In cardiac arrest, however, the risks from acidosis exceed those of hypernatremia.

In less urgent forms of metabolic acidosis, Sodium Bicarbonate Injection, USP may be added to other intravenous fluids. The amount of bicarbonate to be given to older children and adults over a four-to-eight-hour period is approximately 2 to 5 mEq/kg of body weight — depending upon the severity of the acidosis as judged by the lowering of total CO2 content, blood pH and clinical condition of the patient. In metabolic acidosis associated with shock, therapy should be monitored by measuring blood gases, plasma osmolarity, arterial blood lactate, hemodynamics and cardiac rhythm. Bicarbonate therapy should always be planned in a stepwise fashion since the degree of response from a given dose is not precisely predictable. Initially an infusion of 2 to 5 mEq/kg body weight over a period of 4 to 8 hours will produce a measurable improvement in the abnormal acid-base status of the blood. The next step of therapy is dependent upon the clinical response of the patient. If severe symptoms have abated, then the frequency of administration and the size of the dose may be reduced.

In general, it is unwise to attempt full correction of a low total CO2 content during the first 24 hours of therapy, since this may be accompanied by an unrecognized alkalosis because of a delay in the readjustment of ventilation to normal. Owing to this lag, the achievement of total CO2 content of about 20 mEq/liter at the end of the first day of therapy will usually be associated with a normal blood pH. Further modification of the acidosis to completely normal values usually occurs in the presence of normal kidney function when and if the cause of the acidosis can be controlled. Values for total CO2 which are brought to normal or above normal within the first day of therapy are very likely to be associated with grossly alkaline values for blood pH, with ensuing undesired side effects.

Parenteral drug products should be inspected visually for particulate matter and discoloration prior to administration, whenever solution and container permit. See PRECAUTIONS.

Do not use unless solution is clear and the container or seal is intact. Discard unused portion. 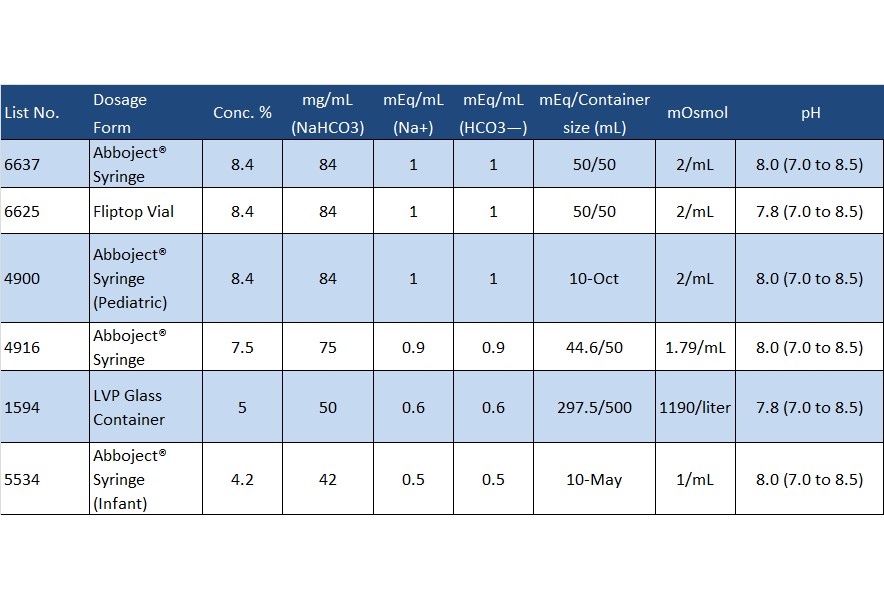 ABBOJECT® is a trademark of the Abbott group of companies. 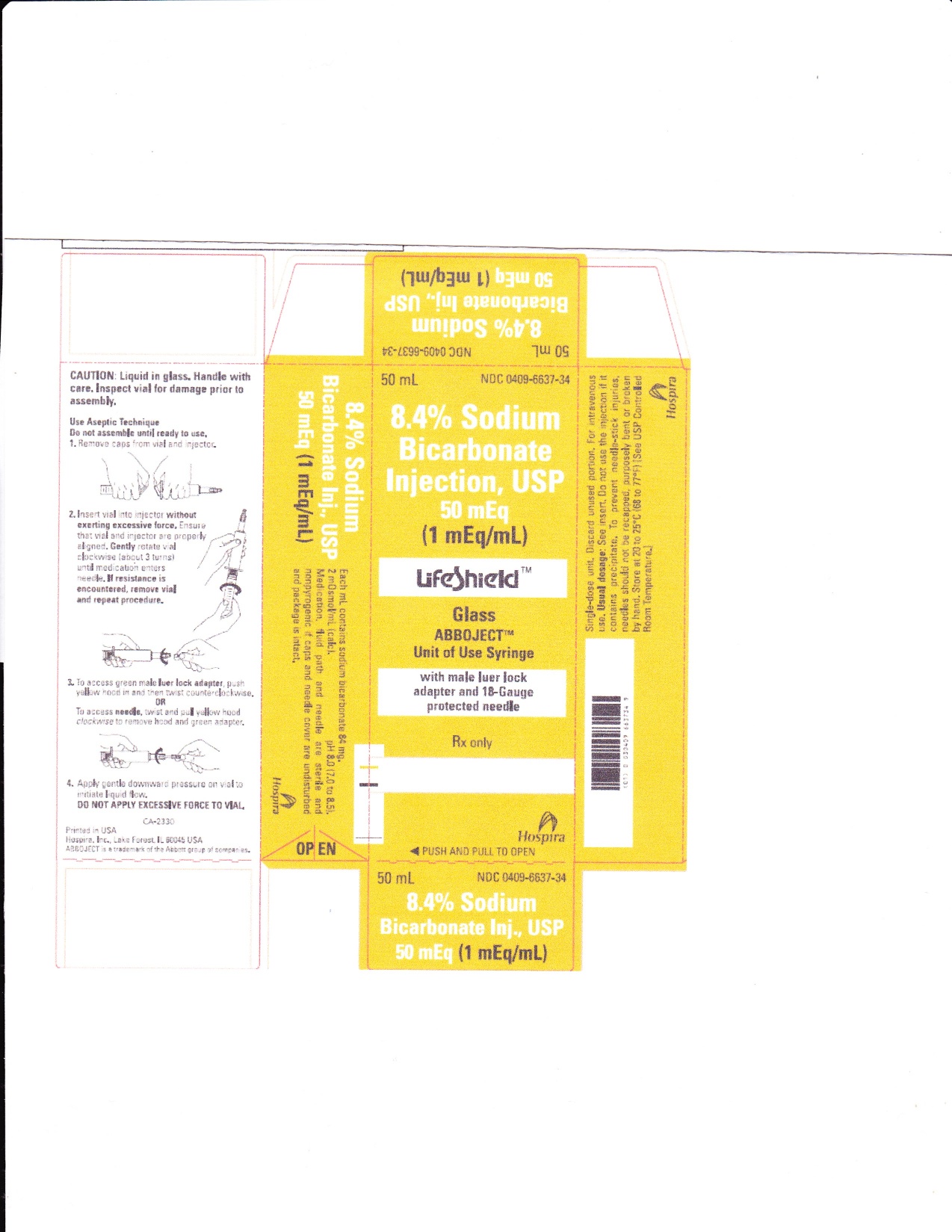 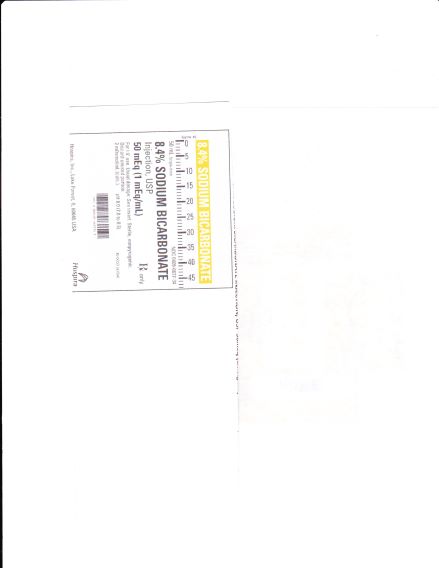