Cyclobenzaprine hydrochloride is a white, crystalline tricyclic amine salt with the empirical formula C 20H 21N HCl and a molecular weight of 311.9. It has a melting point of 217°C, and a pK a of 8.47 at 25°C. It is freely soluble in water and alcohol, sparingly soluble in isopropanol, and insoluble in hydrocarbon solvents. If aqueous solutions are made alkaline, the free base separates.

Cyclobenzaprine HCl relieves skeletal muscle spasm of local origin without interfering with muscle function. It is ineffective in muscle spasm due to central nervous system disease.

Pharmacological studies in animals showed a similarity between the effects of cyclobenzaprine and the structurally related tricyclic antidepressants, including reserpine antagonism, norepinephrine potentiation, potent peripheral and central anticholinergic effects, and sedation. Cyclobenzaprine caused slight to moderate increase in heart rate in animals.

Estimates of mean oral bioavailability of cyclobenzaprine range from 33% to 55%. Cyclobenzaprine exhibits linear pharmacokinetics over the dose range 2.5 mg to 10 mg, and is subject to enterohepatic circulation. It is highly bound to plasma proteins. Drug accumulates when dosed three times a day, reaching steady state within 3-4 days at plasma concentrations about four-fold higher than after a single dose. At steady state in healthy subjects receiving 10 mg t.i.d. (n=18), peak plasma concentration was 25.9 ng/mL (range, 12.8-46.1 ng/mL), and area under the concentration-time (AUC) curve over an 8-hour dosing interval was 177 nghr/mL (range, 80-319 nghr/mL).

Cyclobenzaprine is extensively metabolized, and is excreted primarily as glucuronides via the kidney. Cytochromes P-450 3A4, 1A2, and, to a lesser extent, 2D6, mediate N-demethylation, one of the oxidative pathways for cyclobenzaprine. Cyclobenzaprine is eliminated quite slowly, with an effective half-life of 18 hours (range 8-37 hours; n=18); plasma clearance is 0.7 L/min.

The plasma concentration of cyclobenzaprine is generally higher in the elderly and in patients with hepatic impairment (see PRECAUTIONS, Use in the Elderly and PRECAUTIONS, Impaired Hepatic Function).

In light of these findings, therapy with cyclobenzaprine hydrochloride tablets in the elderly should be initiated with a 5 mg dose and titrated slowly upward.

Eight double-blind controlled clinical studies were performed in 642 patients comparing cyclobenzaprine hydrochloride 10 mg, diazepam, and placebo. Muscle spasm, local pain and tenderness, limitation of motion, and restriction in activities of daily living were evaluated. In three of these studies there was a significantly greater improvement with cyclobenzaprine than with diazepam, while in the other studies the improvement following both treatments was comparable.

Analysis of the data from controlled studies shows that cyclobenzaprine produces clinical improvement whether or not sedation occurs.

A post-marketing surveillance program was carried out in 7607 patients with acute musculoskeletal disorders, and included 297 patients treated with cyclobenzaprine hydrochloride tablets 10 mg for 30 days or longer. The overall effectiveness of cyclobenzaprine was similar to that observed in the double-blind controlled studies; the overall incidence of adverse effects was less (see ADVERSE REACTIONS).

Cyclobenzaprine hydrochloride tablets are indicated as an adjunct to rest and physical therapy for relief of muscle spasm associated with acute, painful musculoskeletal conditions.

Improvement is manifested by relief of muscle spasm and its associated signs and symptoms, namely, pain, tenderness, limitation of motion, and restriction in activities of daily living.

Cyclobenzaprine hydrochloride tablets should be used only for short periods (up to two or three weeks) because adequate evidence of effectiveness for more prolonged use is not available and because muscle spasm associated with acute, painful musculoskeletal conditions is generally of short duration and specific therapy for longer periods is seldom warranted.

Cyclobenzaprine hydrochloride tablets have not been found effective in the treatment of spasticity associated with cerebral or spinal cord disease, or in children with cerebral palsy.

Hypersensitivity to any component of this product.

Concomitant use of monoamine oxidase (MAO) inhibitors or within 14 days after their discontinuation. Hyperpyretic crisis seizures, and deaths have occurred in patients receiving cyclobenzaprine (or structurally similar tricyclic antidepressants) concomitantly with MAO inhibitor drugs.

Cyclobenzaprine is closely related to the tricyclic antidepressants, e.g., amitriptyline and imipramine. In short term studies for indications other than muscle spasm associated with acute musculoskeletal conditions, and usually at doses somewhat greater than those recommended for skeletal muscle spasm, some of the more serious central nervous system reactions noted with the tricyclic antidepressants have occurred (see WARNINGS, below, and ADVERSE REACTIONS).

Tricyclic antidepressants have been reported to produce arrhythmias, sinus tachycardia, prolongation of the conduction time leading to myocardial infarction and stroke.

Cyclobenzaprine may enhance the effects of alcohol, barbiturates, and other CNS depressants.

Because of its atropine-like action, cyclobenzaprine hydrochloride should be used with caution in patients with a history of urinary retention, angle-closure glaucoma, increased intraocular pressure, and in patients taking anticholinergic medication.

Cyclobenzaprine hydrochloride tablets, especially when used with alcohol or other CNS depressants, may impair mental and/or physical abilities required for performance of hazardous tasks, such as operating machinery or driving a motor vehicle. In the elderly, the frequency and severity of adverse events associated with the use of cyclobenzaprine, with or without concomitant medications, is increased. In elderly patients, cyclobenzaprine hydrochloride tablets should be initiated with a 5 mg dose and titrated slowly upward.

Patients should be cautioned about the risk of serotonin syndrome with the concomitant use of Cyclobenzaprine Hydrochloride and other drugs, such as selective serotonin reuptake inhibitors (SSRIs), serotonin norepinephrine reuptake inhibitors (SNRIs), tricyclic antidepressants (TCAs), tramadol, bupropion, meperidine, verapamil, or monoamine oxidase (MAO) inhibitors. Patients should be advised of the signs and symptoms of serotonin syndrome, and be instructed to seek medical care immediately if they experience these symptoms (see WARNINGS, and see PRECAUTIONS, Drug Interactions).

Cyclobenzaprine may enhance the effects of alcohol, barbiturates, and other CNS depressants.

Tricyclic antidepressants may block the antihypertensive action of guanethidine and similarly acting compounds.

In rats treated with cyclobenzaprine hydrochloride for up to 67 weeks at doses of approximately 5 to 40 times the maximum recommended human dose, pale, sometimes enlarged, livers were noted and there was a dose-related hepatocyte vacuolation with lipidosis. In the higher dose groups this microscopic change was seen after 26 weeks and even earlier in rats which died prior to 26 weeks; at lower doses, the change was not seen until after 26 weeks.

Reproduction studies have been performed in rats, mice and rabbits at doses up to 20 times the human dose, and have revealed no evidence of impaired fertility or harm to the fetus due to cyclobenzaprine. There are, however, no adequate and well-controlled studies in pregnant women. Because animal reproduction studies are not always predictive of human response, this drug should be used during pregnancy only if clearly needed.

Safety and effectiveness of cyclobenzaprine hydrochloride in pediatric patients below 15 years of age have not been established.

Use in the Elderly

Incidence of most common adverse reactions in the 2 double-blind ‡, placebo-controlled 5 mg studies (incidence of > 3% on cyclobenzaprine hydrochloride tablets 5 mg):

The following list of adverse reactions is based on the experience in 473 patients treated with cyclobenzaprine hydrochloride tablets 10 mg in additional controlled clinical studies, 7607 patients in the post-marketing surveillance program, and reports received since the drug was marketed. The overall incidence of adverse reactions among patients in the surveillance program was less than the incidence in the controlled clinical studies.

The adverse reactions reported most frequently with cyclobenzaprine hydrochloride were drowsiness, dry mouth and dizziness. The incidence of these common adverse reactions was lower in the surveillance program than in the controlled clinical studies:

Among the less frequent adverse reactions, there was no appreciable difference in incidence in controlled clinical studies or in the surveillance program. Adverse reactions which were reported in 1% to 3% of the patients were: fatigue/tiredness, asthenia, nausea, constipation, dyspepsia, unpleasant taste, blurred vision, headache, nervousness, and confusion.

The following adverse reactions have been reported in post-marketing experience or with an incidence of less than 1% of patients in clinical trials with the 10 mg tablet:

Other reactions, reported rarely for cyclobenzaprine hydrochloride under circumstances where a causal relationship could not be established or reported for other tricyclic drugs, are listed to serve as alerting information to physicians:

Pharmacologic similarities among the tricyclic drugs require that certain withdrawal symptoms be considered when cyclobenzaprine hydrochloride is administered, even though they have not been reported to occur with this drug. Abrupt cessation of treatment after prolonged administration rarely may produce nausea, headache, and malaise. These are not indicative of addiction.

Other potential effects of overdosage include any of the symptoms listed under ADVERSE REACTIONS.

As management of overdose is complex and changing, it is recommended that the physician contact a poison control center for current information on treatment.

In order to protect against the rare but potentially critical manifestations described above, obtain an ECG and immediately initiate cardiac monitoring. Protect the patient's airway, establish an intravenous line and initiate gastric decontamination. Observation with cardiac monitoring and observation for signs of CNS or respiratory depression, hypotension, cardiac dysrhythmias and/or conduction blocks, and seizures is necessary. If signs of toxicity occur at any time during this period, extended monitoring is required. Monitoring of plasma drug levels should not guide management of the patient. Dialysis is probably of no value because of low plasma concentrations of the drug.

All patients suspected of an overdose with cyclobenzaprine hydrochloride should receive gastrointestinal decontamination. This should include large volume gastric lavage followed by activated charcoal. If consciousness is impaired, the airway should be secured prior to lavage and emesis is contraindicated.

A maximal limb-lead QRS duration of ≥0.10 seconds may be the best indication of the severity of the overdose. Serum alkalinization, to a pH of 7.45 to 7.55, using intravenous sodium bicarbonate and hyperventilation (as needed), should be instituted for patients with dysrhythmias and/or QRS widening. A pH >7.60 or a pCO 2 <20 mmHg is undesirable. Dysrhythmias unresponsive to sodium bicarbonate therapy/hyperventilation may respond to lidocaine, bretylium or phenytoin. Type 1A and 1C antiarrhythmics are generally contraindicated (e.g., quinidine, disopyramide, and procainamide).

In patients with CNS depression, early intubation is advised because of the potential for abrupt deterioration. Seizures should be controlled with benzodiazepines or, if these are ineffective, other anticonvulsants (e.g., phenobarbital, phenytoin). Physostigmine is not recommended except to treat life-threatening symptoms that have been unresponsive to other therapies, and then only in close consultation with a poison control center.

Since overdosage is often deliberate, patients may attempt suicide by other means during the recovery phase. Psychiatric referral may be appropriate.

The principles of management of child and adult overdosages are similar. It is strongly recommended that the physician contact the local poison control center for specific pediatric treatment.

For most patients, the recommended dose of cyclobenzaprine hydrochloride tablets is 5 mg three times a day. Based on individual patient response, the dose may be increased to 10 mg three times a day. Use of cyclobenzaprine hydrochloride tablets for periods longer than two or three weeks is not recommended (see INDICATIONS AND USAGE).

Less frequent dosing should be considered for hepatically impaired or elderly patients (see PRECAUTIONS, Impaired Hepatic Function, and Use in the Elderly).

Cyclobenzaprine Hydrochloride Tablets, USP 10 mg round, yellow film-coated tablets, debossed "2632" on one side and debossed "V" on the reverse side.

They are supplied as follows: 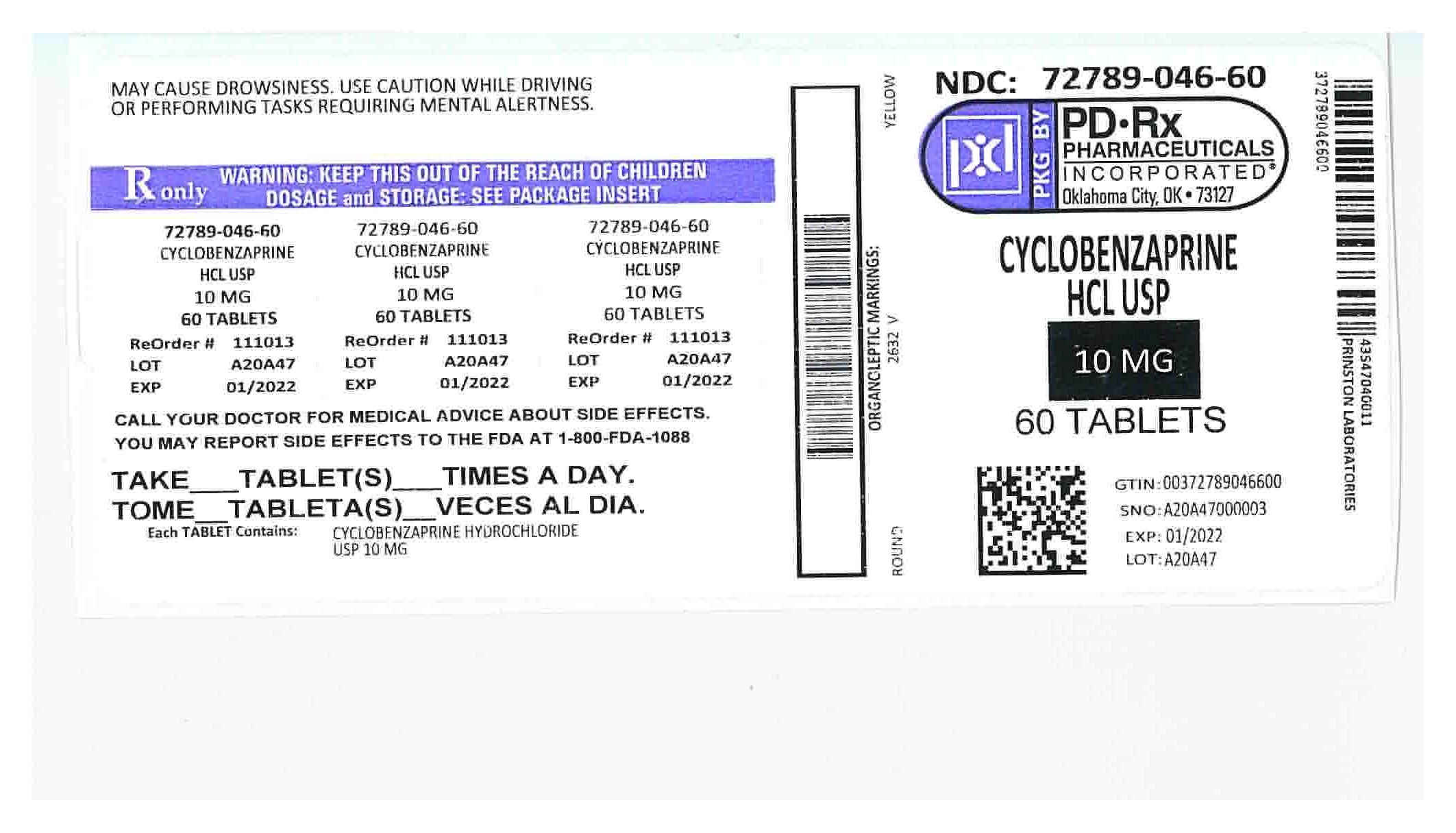