Norepinephrine (sometimes referred to as l-arterenol/Levarterenol or l-norepinephrine) is a sympathomimetic amine which differs from epinephrine by the absence of a methyl group on the nitrogen atom. 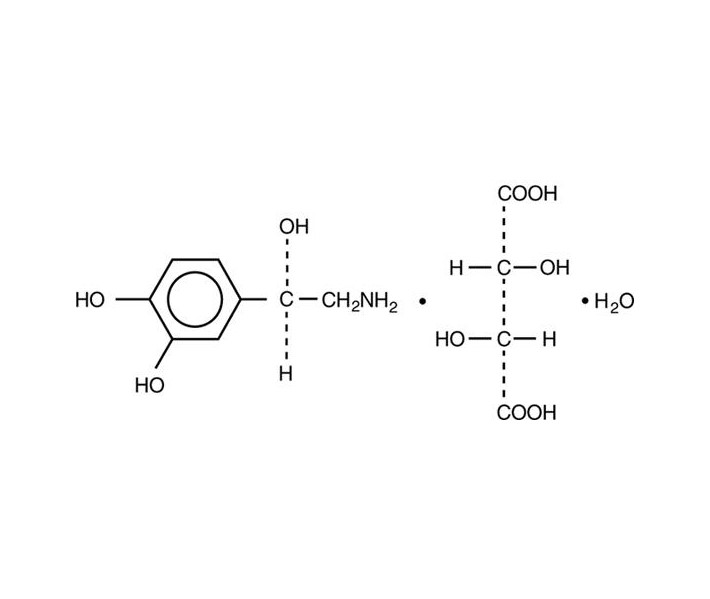 LEVOPHED is supplied in sterile aqueous solution in the form of the bitartrate salt to be administered by intravenous infusion following dilution. Norepinephrine is sparingly soluble in water, very slightly soluble in alcohol and ether, and readily soluble in acids. Each mL contains the equivalent of 1 mg base of norepinephrine, sodium chloride for isotonicity, and not more than 0.2 mg of sodium metabisulfite as an antioxidant. It has a pH of 3 to 4.5. The air in the vials has been displaced by nitrogen gas.

As an adjunct in the treatment of cardiac arrest and profound hypotension.

LEVOPHED should not be given to patients who are hypotensive from blood volume deficits except as an emergency measure to maintain coronary and cerebral artery perfusion until blood volume replacement therapy can be completed. If LEVOPHED is continuously administered to maintain blood pressure in the absence of blood volume replacement, the following may occur: severe peripheral and visceral vasoconstriction, decreased renal perfusion and urine output, poor systemic blood flow despite "normal" blood pressure, tissue hypoxia, and lactate acidosis.

LEVOPHED should also not be given to patients with mesenteric or peripheral vascular thrombosis (because of the risk of increasing ischemia and extending the area of infarction) unless, in the opinion of the attending physician, the administration of LEVOPHED is necessary as a life-saving procedure.

Cyclopropane and halothane anesthetics increase cardiac autonomic irritability and therefore seem to sensitize the myocardium to the action of intravenously administered epinephrine or norepinephrine. Hence, the use of LEVOPHED during cyclopropane and halothane anesthesia is generally considered contraindicated because of the risk of producing ventricular tachycardia or fibrillation.

The same type of cardiac arrhythmias may result from the use of LEVOPHED in patients with profound hypoxia or hypercarbia.

LEVOPHED should be used with extreme caution in patients receiving monoamine oxidase inhibitors (MAOI) or antidepressants of the triptyline or imipramine types, because severe, prolonged hypertension may result.

LEVOPHED Bitartrate Injection contains sodium metabisulfite, a sulfite that may cause allergic-type reactions including anaphylactic symptoms and life-threatening or less severe asthmatic episodes in certain susceptible people. The overall prevalence of sulfite sensitivity in the general population is unknown. Sulfite sensitivity is seen more frequently in asthmatic than in nonasthmatic people.

Avoid Hypertension: Because of the potency of LEVOPHED and because of varying response to pressor substances, the possibility always exists that dangerously high blood pressure may be produced with overdoses of this pressor agent. It is desirable, therefore, to record the blood pressure every two minutes from the time administration is started until the desired blood pressure is obtained, then every five minutes if administration is to be continued.

The rate of flow must be watched constantly, and the patient should never be left unattended while receiving LEVOPHED. Headache may be a symptom of hypertension due to overdosage.

Site of Infusion: Whenever possible, infusions of LEVOPHED should be given into a large vein, particularly an antecubital vein because, when administered into this vein, the risk of necrosis of the overlying skin from prolonged vasoconstriction is apparently very slight. Some authors have indicated that the femoral vein is also an acceptable route of administration. A catheter tie-in technique should be avoided, if possible, since the obstruction to blood flow around the tubing may cause stasis and increased local concentration of the drug. Occlusive vascular diseases (for example, atherosclerosis, arteriosclerosis, diabetic endarteritis, Buerger's disease) are more likely to occur in the lower than in the upper extremity. Therefore, one should avoid the veins of the leg in elderly patients or in those suffering from such disorders. Gangrene has been reported in a lower extremity when infusions of LEVOPHED were given in an ankle vein.

Extravasation: The infusion site should be checked frequently for free flow. Care should be taken to avoid extravasation of LEVOPHED into the tissues, as local necrosis might ensue due to the vasoconstrictive action of the drug. Blanching along the course of the infused vein, sometimes without obvious extravasation, has been attributed to vasa vasorum constriction with increased permeability of the vein wall, permitting some leakage.

This also may progress on rare occasions to superficial slough, particularly during infusion into leg veins in elderly patients or in those suffering from obliterative vascular disease. Hence, if blanching occurs, consideration should be given to the advisability of changing the infusion site at intervals to allow the effects of local vasoconstriction to subside. 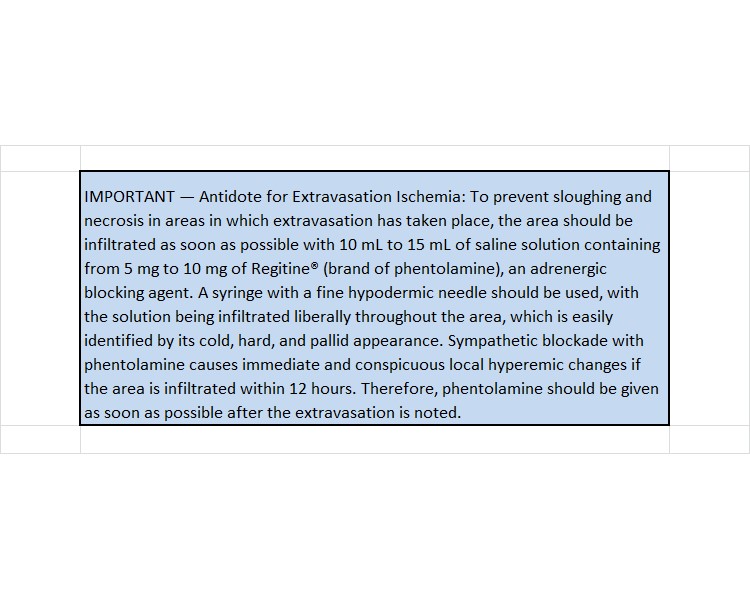 Drug Interactions: Cyclopropane and halothane anesthetics increase cardiac autonomic irritability and therefore seem to sensitize the myocardium to the action of intravenously administered epinephrine or norepinephrine. Hence, the use of LEVOPHED during cyclopropane and halothane anesthesia is generally considered contraindicated because of the risk of producing ventricular tachycardia or fibrillation. The same type of cardiac arrhythmias may result from the use of LEVOPHED in patients with profound hypoxia or hypercarbia.

LEVOPHED should be used with extreme caution in patients receiving monoamine oxidase inhibitors (MAOI) or antidepressants of the triptyline or imipramine types, because severe, prolonged hypertension may result.

Carcinogenesis, Mutagenesis, Impairment of Fertility: Studies have not been performed.

Pediatric Use: Safety and effectiveness in pediatric patients has not been established.

Geriatric Use: Clinical studies of LEVOPHED did not include sufficient numbers of subjects aged 65 and over to determine whether they respond differently from younger subjects. Other reported clinical experience has not identified differences in responses between the elderly and younger patients. In general, dose selection for an elderly patient should be cautious, usually starting at the low end of the dosing range, reflecting the greater frequency of decreased hepatic, renal, or cardiac function, and of concomitant disease or other drug therapy.

LEVOPHED infusions should not be administered into the veins in the leg in elderly patients (see PRECAUTIONS, General).

The following reactions can occur:

Body As A Whole: Ischemic injury due to potent vasoconstrictor action and tissue hypoxia.

Cardiovascular System: Bradycardia, probably as a reflex result of a rise in blood pressure, arrhythmias, and stress cardiomyopathy.

Prolonged administration of any potent vasopressor may result in plasma volume depletion which should be continuously corrected by appropriate fluid and electrolyte replacement therapy. If plasma volumes are not corrected, hypotension may recur when LEVOPHED is discontinued, or blood pressure may be maintained at the risk of severe peripheral and visceral vasoconstriction (e.g., decreased renal perfusion) with diminution in blood flow and tissue perfusion with subsequent tissue hypoxia and lactic acidosis and possible ischemic injury. Gangrene of extremities has been rarely reported.

Overdosage with LEVOPHED may result in headache, severe hypertension, reflex bradycardia, marked increase in peripheral resistance, and decreased cardiac output. In case of accidental overdosage, as evidenced by excessive blood pressure elevation, discontinue LEVOPHED until the condition of the patient stabilizes.

Norepinephrine Bitartrate Injection is a concentrated, potent drug which must be diluted in dextrose containing solutions prior to infusion. An infusion of LEVOPHED should be given into a large vein (see PRECAUTIONS).

Blood volume depletion should always be corrected as fully as possible before any vasopressor is administered. When, as an emergency measure, intraaortic pressures must be maintained to prevent cerebral or coronary artery ischemia, LEVOPHED can be administered before and concurrently with blood volume replacement.

Diluent: LEVOPHED should be diluted in 5 percent dextrose injection or 5 percent dextrose and sodium chloride injections. These dextrose containing fluids are protection against significant loss of potency due to oxidation. Administration in saline solution alone is not recommended. Whole blood or plasma, if indicated to increase blood volume, should be administered separately (for example, by use of a Y-tube and individual containers if given simultaneously).

Average Dosage: Add the content of the vial (4 mg/4 mL) of LEVOPHED to 1,000 mL of a 5 percent dextrose containing solution. Each mL of this dilution contains 4 mcg of the base of LEVOPHED. Give this solution by intravenous infusion. Insert a plastic intravenous catheter through a suitable bore needle well advanced centrally into the vein and securely fixed with adhesive tape, avoiding, if possible, a catheter tie-in technique as this promotes stasis. An IV drip chamber or other suitable metering device is essential to permit an accurate estimation of the rate of flow in drops per minute. After observing the response to an initial dose of 2 mL to 3 mL (from 8 mcg to 12 mcg of base) per minute, adjust the rate of flow to establish and maintain a low normal blood pressure (usually 80 mm Hg to 100 mm Hg systolic) sufficient to maintain the circulation to vital organs. In previously hypertensive patients, it is recommended that the blood pressure should be raised no higher than 40 mm Hg below the preexisting systolic pressure. The average maintenance dose ranges from 0.5 mL to 1 mL per minute (from 2 mcg to 4 mcg of base).

High Dosage: Great individual variation occurs in the dose required to attain and maintain an adequate blood pressure. In all cases, dosage of LEVOPHED should be titrated according to the response of the patient. Occasionally much larger or even enormous daily doses (as high as 68 mg base or 17 vials) may be necessary if the patient remains hypotensive, but occult blood volume depletion should always be suspected and corrected when present. Central venous pressure monitoring is usually helpful in detecting and treating this situation.

Fluid Intake: The degree of dilution depends on clinical fluid volume requirements. If large volumes of fluid (dextrose) are needed at a flow rate that would involve an excessive dose of the pressor agent per unit of time, a solution more dilute than 4 mcg per mL should be used. On the other hand, when large volumes of fluid are clinically undesirable, a concentration greater than 4 mcg per mL may be necessary.

Duration of Therapy: The infusion should be continued until adequate blood pressure and tissue perfusion are maintained without therapy. Infusions of LEVOPHED should be reduced gradually, avoiding abrupt withdrawal. In some of the reported cases of vascular collapse due to acute myocardial infarction, treatment was required for up to six days.

Infusions of LEVOPHED are usually administered intravenously during cardiac resuscitation to restore and maintain an adequate blood pressure after an effective heartbeat and ventilation have been established by other means. [LEVOPHED's powerful beta-adrenergic stimulating action is also thought to increase the strength and effectiveness of systolic contractions once they occur.]

Average Dosage: To maintain systemic blood pressure during the management of cardiac arrest, LEVOPHED is used in the same manner as described under Restoration of Blood Pressure in Acute Hypotensive States.

Parenteral drug products should be inspected visually for particulate matter and discoloration prior to use, whenever solution and container permit.

Do not use the solution if its color is pinkish or darker than slightly yellow or if it contains a precipitate. 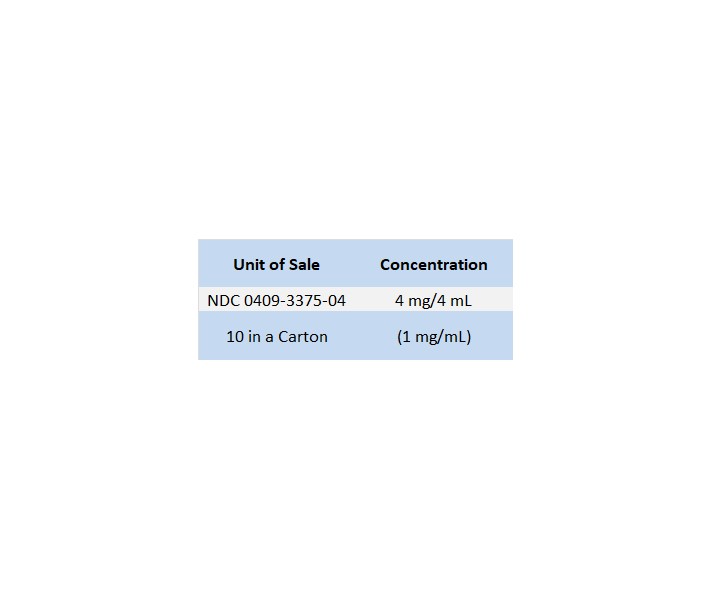 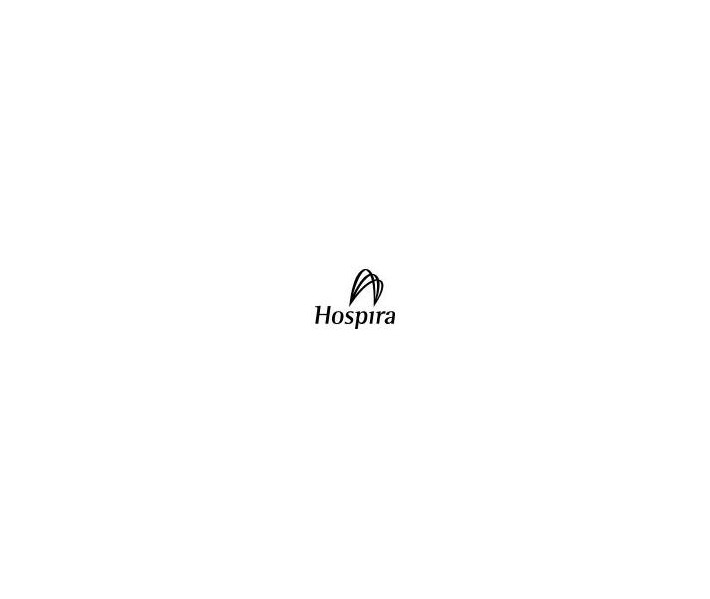 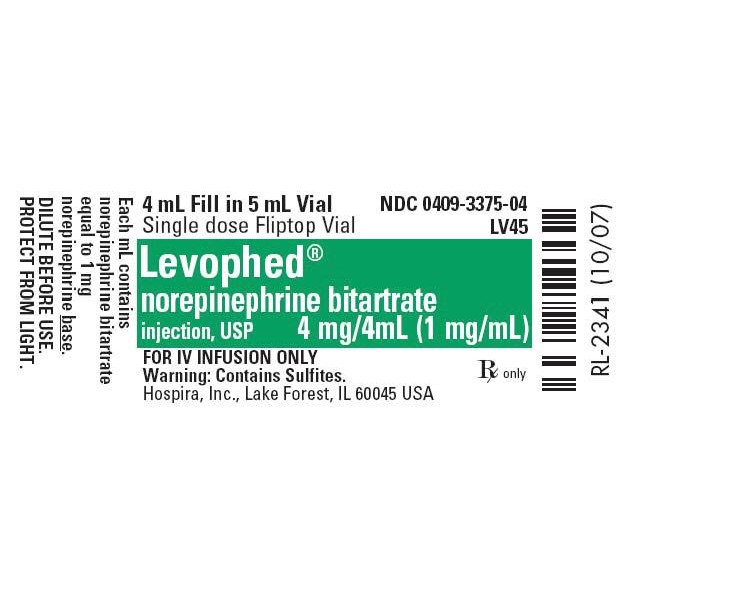 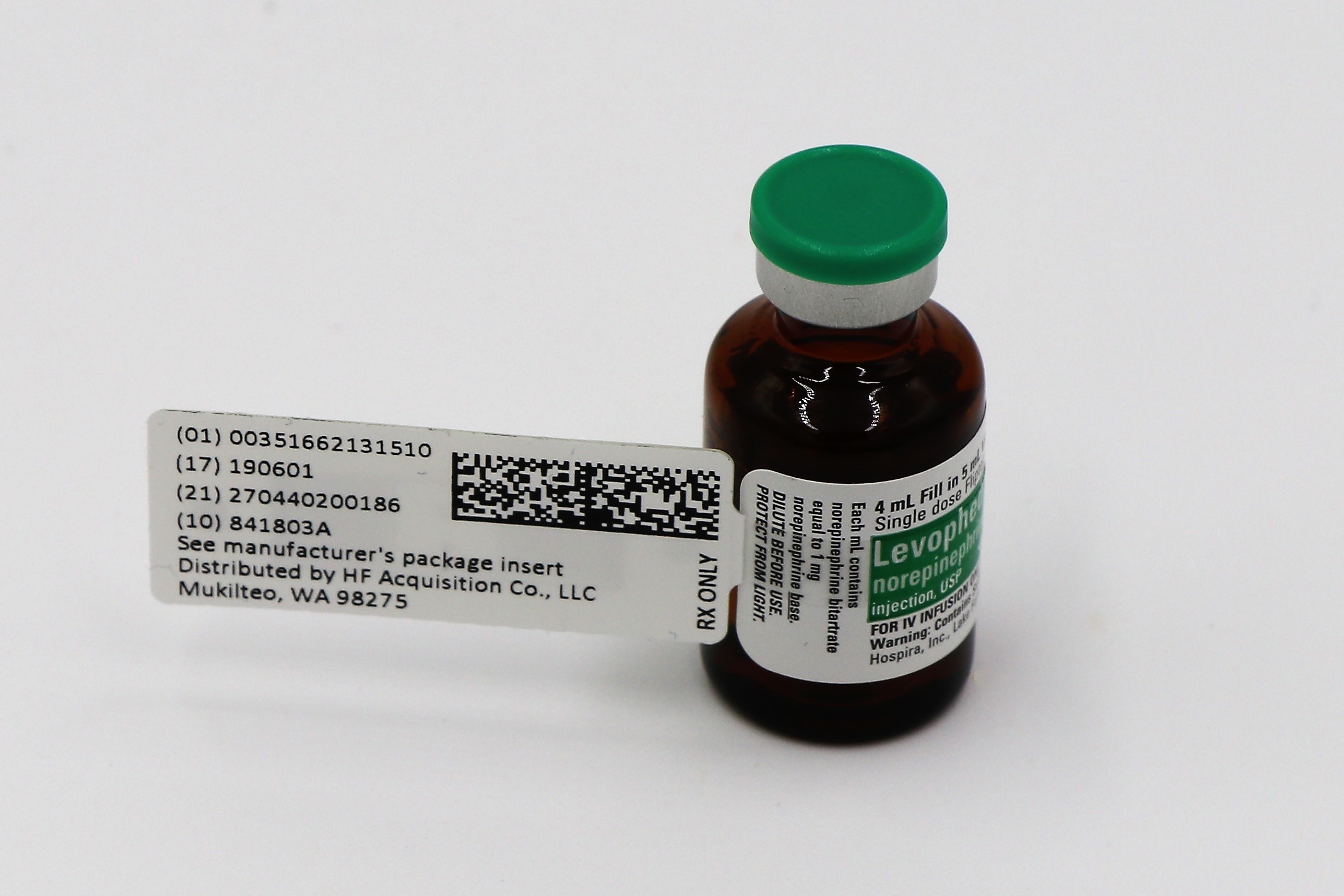