Diphenhydramine hydrochloride is an antihistamine drug having the chemical name 2-(Diphenylmethoxy)-N,N-dimethylethylamine hydrochloride. It occurs as a white, crystalline powder, is freely soluble in water and alcohol.

The structural formula is as follows:

Diphenhydramine hydrochloride is an antihistamine with anticholinergic (drying) and sedative side effects. Antihistamines appear to compete with histamine for cell receptor sites on effector cells.

For amelioration of allergic reactions to blood or plasma, in anaphylaxis as an adjunct to epinephrine and other standard measures after the acute symptoms have been controlled, and for other uncomplicated allergic conditions of the immediate type when oral therapy is impossible or contraindicated.

For active treatment of motion sickness.

Use in Neonates or Premature Infants

This drug should not be used in neonates or premature infants.

Use in Nursing Mothers

Because of the higher risk of antihistamines for infants generally, and for neonates and prematures in particular, antihistamine therapy is contraindicated in nursing mothers.

Use as a Local Anesthetic

Because of the risk of local necrosis, this drug should not be used as a local anesthetic. Antihistamines are also contraindicated in the following conditions: Hypersensitivity to diphenhydramine hydrochloride and other antihistamines of similar chemical structure.

Local necrosis has been associated with the use of subcutaneous or intradermal use of intravenous diphenhydramine hydrochloride.

Use in Pediatric Patients

In pediatric patients, especially, antihistamines in overdosage may cause hallucinations, convulsions, or death.

Use in the Elderly (approximately 60 years or older)

Antihistamines are more likely to cause dizziness, sedation, and hypotension in elderly patients.

Patients taking diphenhydramine hydrochloride should be advised that this drug may cause drowsiness and has an additive effect with alcohol.

Patients should be warned about engaging in activities requiring mental alertness such as driving a car or operating appliances, machinery, etc.

Long-term studies in animals to determine mutagenic and carcinogenic potential have not been performed.

Pregnancy Category B. Reproduction studies have been performed in rats and rabbits at doses up to 5 times the human dose and have revealed no evidence of impaired fertility or harm to the fetus due to diphenhydramine hydrochloride. There are, however, no adequate and well-controlled studies in pregnant women. Because animal reproduction studies are not always predictive of human response, this drug should be used during pregnancy only if clearly needed.

Diphenhydramine hydrochloride should not be used in neonates and premature infants (see CONTRAINDICATIONS).

Diphenhydramine hydrochloride may diminish mental alertness, or, in the young pediatric patient, cause excitation. Overdosage may cause hallucinations, convulsions, or death (see WARNINGS and OVERDOSAGE).

The most frequent adverse reactions are underscored.

Stimulants should not be used.

Vasopressors may be used to treat hypotension.

THIS PRODUCT IS FOR INTRAVENOUS OR INTRAMUSCULAR ADMINISTRATION ONLY.

Diphenhydramine hydrochloride in the injectable form is indicated when the oral form is impractical.

DOSAGE SHOULD BE INDIVIDUALIZED ACCORDING TO THE NEEDS AND THE RESPONSE OF THE PATIENT.

Adults: 10 to 50 mg intravenously at a rate generally not exceeding 25 mg/min, or deep intramuscularly, 100 mg if required; maximum daily dosage is 400 mg.

DiphenhydrAMINE Hydrochloride Injection, USP in parenteral form is supplied as:

It is supplied as a sterile, pyrogen-free solution containing 50 mg diphenhydramine hydrochloride in each milliliter of solution, and available in packages of 25.

Protect from freezing and light. 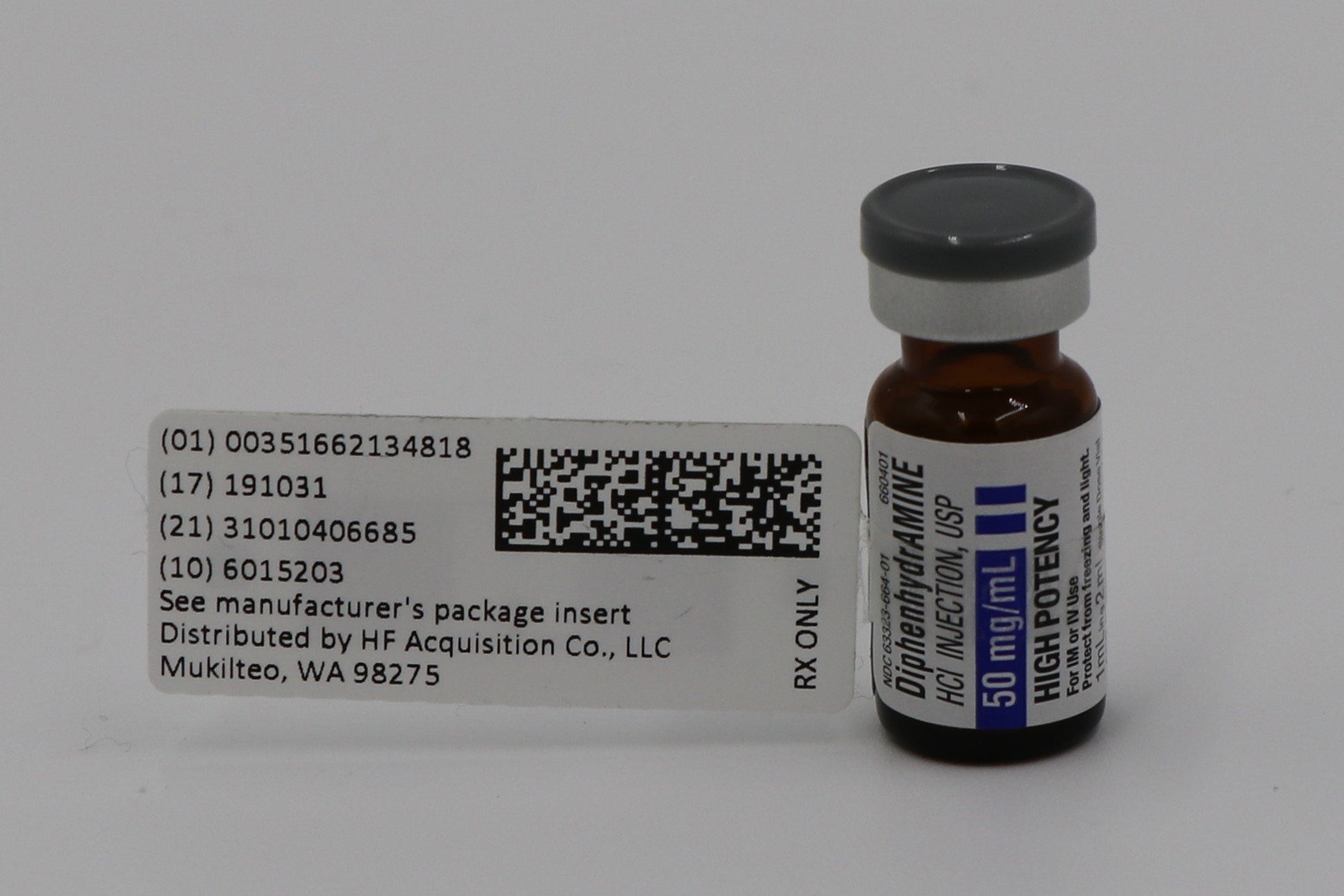