Solifenacin Succinate Tablets is a muscarinic antagonist indicated for the treatment of overactive bladder with symptoms of urge urinary incontinence, urgency, and urinary frequency.

The recommended dose of Solifenacin Succinate Tablets is 5 mg once daily. If the 5 mg dose is well tolerated, the dose may be increased to 10 mg once daily.

For patients with severe renal impairment (CL cr <30 mL/min), a daily dose of Solifenacin Succinate Tablets greater than 5 mg is not recommended [see Warnings and Precautions ( 5.7) and Use in Specific Populations ( 8.6)].

For patients with moderate hepatic impairment (Child-Pugh B), a daily dose of Solifenacin Succinate Tablets greater than 5 mg is not recommended. Use of Solifenacin Succinate Tablets in patients with severe hepatic impairment (Child-Pugh C) is not recommended [see Warnings and Precautions ( 5.6) and Use in Specific Populations ( 8.7)].

When administered with potent CYP3A4 inhibitors such as ketoconazole, a daily dose of Solifenacin Succinate Tablets greater than 5 mg is not recommended [see Drug Interactions ( 7.1)].

Solifenacin is contraindicated in patients with:

Solifenacin, like other anticholinergic drugs, should be administered with caution to patients with clinically significant bladder outflow obstruction because of the risk of urinary retention [see Contraindications ( 4)].

Solifenacin, like other anticholinergics, should be used with caution in patients with decreased gastrointestinal motility [seeContraindications ( 4)].

Solifenacin should be used with caution in patients being treated for narrow-angle glaucoma [see Contraindications ( 4)].

In a study of the effect of solifenacin on the QT interval in 76 healthy women [see Clinical Pharmacology ( 12.2)] the QT prolonging effect appeared less with solifenacin 10 mg than with 30 mg (three times the maximum recommended dose), and the effect of solifenacin 30 mg did not appear as large as that of the positive control moxifloxacin at its therapeutic dose. This observation should be considered in clinical decisions to prescribe Solifenacin for patients with a known history of QT prolongation or patients who are taking medications known to prolong the QT interval.

Solifenacin has been evaluated for safety in 1811 patients in randomized, placebo-controlled trials. Expected adverse reactions of antimuscarinic agents are dry mouth, constipation, blurred vision (accommodation abnormalities), urinary retention, and dry eyes. The incidence of dry mouth and constipation in patients treated with Solifenacin was higher in the 10 mg compared to the 5 mg dose group.

The most frequent adverse reaction leading to study discontinuation was dry mouth (1.5%). Table 1 lists the rates of identified adverse reactions, derived from all reported adverse events, in randomized, placebo-controlled trials at an incidence greater than placebo and in 1% or more of patients treated with Solifenacin 5 or 10 mg once daily for up to 12 weeks.

Because these spontaneously reported events are from the worldwide postmarketing experience, the frequency of events and the role of solifenacin in their causation cannot be reliably determined.

The following events have been reported in association with solifenacin use in worldwide postmarketing experience:

Following the administration of 10 mg of Solifenacin in presence of 400 mg of ketoconazole, a potent inhibitor of CYP3A4, the mean C max﻿ and AUC of solifenacin increased by 1.5 and 2.7-fold, respectively. Therefore, it is recommended not to exceed a 5 mg daily dose of Solifenacin when administered with therapeutic doses of ketoconazole or other potent CYP3A4 inhibitors [see Dosage and Administration ( 2.4) and Clinical Pharmacology ( 12.3)] . The effects of weak or moderate CYP3A4 inhibitors were not examined.

There were no in vivo studies conducted to evaluate the effect of CYP3A4 inducers on Solifenacin. In vitro drug metabolism studies have shown that solifenacin is a substrate of CYP3A4. Therefore, inducers of CYP3A4 may decrease the concentration of solifenacin.

At therapeutic concentrations, solifenacin does not inhibit CYP1A1/2, 2C9, 2C19, 2D6, or 3A4 derived from human liver microsomes.

Solifenacin has no significant effect on the pharmacokinetics of R-warfarin or S-warfarin [see Clinical Pharmacology ( 12.3)].

In the presence of solifenacin there are no significant changes in the plasma concentrations of combined oral contraceptives (ethinyl estradiol/levonorgestrel) [see Clinical Pharmacology ( 12.3)].

Solifenacin had no significant effect on the pharmacokinetics of digoxin (0.125 mg/day) in healthy subjects [see Clinical Pharmacology ( 12.3)].

There are no adequate and well-controlled studies in pregnant women.

Reproduction studies have been performed in mice, rats and rabbits. After oral administration of 14C-solifenacin succinate to pregnant mice, drug-related material was shown to cross the placental barrier. No embryotoxicity or teratogenicity was observed in mice treated with 1.2 times (30 mg/kg/day) the expected exposure at the maximum recommended human dose [MRHD] of 10 mg. Administration of solifenacin succinate to pregnant mice at 3.6 times and greater (100 mg/kg/day and greater) the exposure at the MRHD, during the major period of organ development resulted in reduced fetal body weights. Administration of 7.9 times (250 mg/kg/day) the MRHD to pregnant mice resulted in an increased incidence of cleft palate. In utero and lactational exposures to maternal doses of solifenacin succinate of 3.6 times (100 mg/kg/day) the MRHD resulted in reduced peripartum and postnatal survival, reductions in body weight gain, and delayed physical development (eye opening and vaginal patency). An increase in the percentage of male offspring was also observed in litters from offspring exposed to maternal doses of 250 mg/kg/day. No embryotoxic effects were observed in rats at up to 50 mg/kg/day (<1 times the exposure at the MRHD) or in rabbits at up to 1.8 times (50 mg/kg/day) the exposure at the MRHD. Because animal reproduction studies are not always predictive of human response, Solifenacin should be used during pregnancy only if the potential benefit justifies the potential risk to the fetus.

The effect of Solifenacin on labor and delivery in humans has not been studied.

After oral administration of 14C-solifenacin succinate to lactating mice, radioactivity was detected in maternal milk. There were no adverse observations in mice treated with 1.2 times (30 mg/kg/day) the expected exposure at the maximum recommended human dose [MRHD]. Pups of female mice treated with 3.6 times (100 mg/kg/day) the exposure at the MRHD or greater revealed reduced body weights, postpartum pup mortality or delays in the onset of reflex and physical development during the lactation period.

The safety and effectiveness of Solifenacin in pediatric patients have not been established.

Multiple dose studies of Solifenacin in elderly volunteers (65 to 80 years) showed that C max, AUC and t 1/2 values were 20-25% higher as compared to the younger volunteers (18 to 55 years).

The pharmacokinetics of solifenacin is not significantly influenced by gender.

Overdosage with Solifenacin Succinate Tablets can potentially result in severe anticholinergic effects and should be treated accordingly. The highest dose ingested in an accidental overdose of solifenacin succinate was 280 mg in a 5-hour period. This case was associated with mental status changes. Some cases reported a decrease in the level of consciousness.

In the event of overdose with Solifenacin Succinate Tablets, treat with gastric lavage and appropriate supportive measures. ECG monitoring is also recommended.

The effect of 10 mg and 30 mg solifenacin succinate on the QT interval was evaluated at the time of peak plasma concentration of solifenacin in a multi-dose, randomized, double-blind, placebo and positive-controlled (moxifloxacin 400 mg) trial. Subjects were randomized to one of two treatment groups after receiving placebo and moxifloxacin sequentially. One group (n=51) went on to complete 3 additional sequential periods of dosing with solifenacin 10, 20, and 30 mg while the second group (n=25) in parallel completed a sequence of placebo and moxifloxacin. Study subjects were female volunteers aged 19 to 79 years. The 30 mg dose of solifenacin succinate (three times the highest recommended dose) was chosen for use in this study because this dose results in a solifenacin exposure that covers those observed upon co-administration of 10 mg Solifenacin Succinate Tablets with potent CYP3A4 inhibitors (e.g. ketoconazole, 400 mg). Due to the sequential dose escalating nature of the study, baseline EKG measurements were separated from the final QT assessment (of the 30 mg dose level) by 33 days.

The median difference from baseline in heart rate associated with the 10 and 30 mg doses of solifenacin succinate compared to placebo was -2 and 0 beats/minute, respectively. Because a significant period effect on QTc was observed, the QTc effects were analyzed utilizing the parallel placebo control arm rather than the pre-specified intra-patient analysis. Representative results are shown in Table 2.

Table 2: QTc changes in msec (90%CI) from baseline at Tmax (relative to placebo)*

Moxifloxacin was included as a positive control in this study and, given the length of the study, its effect on the QT interval was evaluated in 3 different sessions. The placebo subtracted mean changes (90% CI) in QTcF for moxifloxacin in the three sessions were 11 (7, 14), 12 (8, 17), and 16 (12, 21), respectively.

The QT interval prolonging effect appeared greater for the 30 mg compared to the 10 mg dose of solifenacin. Although the effect of the highest solifenacin dose (three times the maximum therapeutic dose) studied did not appear as large as that of the positive control moxifloxacin at its therapeutic dose, the confidence intervals overlapped. This study was not designed to draw direct statistical conclusions between the drugs or the dose levels.

Solifenacin may be administered without regard to meals. A single 10 mg dose administration of Solifenacin with food increased C max and AUC by 4% and 3%, respectively.

Solifenacin is approximately 98% ( in vivo) bound to human plasma proteins, principally to ∝1-acid glycoprotein. Solifenacin is highly distributed to non-CNS tissues, having a mean steady-state volume of distribution of 600 L.

Solifenacin is extensively metabolized in the liver. The primary pathway for elimination is by way of CYP3A4; however, alternate metabolic pathways exist. The primary metabolic routes of solifenacin are through N-oxidation of the quinuclidin ring and 4R-hydroxylation of tetrahydroisoquinoline ring. One pharmacologically active metabolite (4R-hydroxy solifenacin), occurring at low concentrations and unlikely to contribute significantly to clinical activity, and three pharmacologically inactive metabolites (N-glucuronide and the N-oxide and 4R-hydroxy-N-oxide of solifenacin) have been found in human plasma after oral dosing.

In a crossover study, following blockade of CYP3A4 by coadministration of the potent CYP3A4 inhibitor, ketoconazole 400 mg, once daily for 21 days, the mean C max and AUC of solifenacin increased by 1.5 and 2.7-fold, respectively [see Dosage and Administration ( 2.4) and Drug Interactions ( 7.1)].

In a crossover study, subjects received digoxin (loading dose of 0.25 mg on day 1, followed by 0.125 mg from days 2 to 8) for 8 days. Consecutively, they received solifenacin 10 mg or matching placebo with digoxin 0.125 mg for additional 10 days. When digoxin was coadministered with solifenacin, the mean C max and AUC increased by 13% and 4%, respectively [see Drug Interactions ( 7.6)].

No increase in tumors was found following the administration of solifenacin succinate to male and female mice for 104 weeks at doses up to 200 mg/kg/day (5 and 9 times, respectively, of the exposure at the maximum recommended human dose [MRHD] of 10 mg), and male and female rats for 104 weeks at doses up to 20 and 15 mg/kg/day, respectively (<1 times the exposure at the MRHD).

Solifenacin succinate was not mutagenic in the in vitro Salmonella typhimurium or Escherichia coli microbial mutagenicity test or chromosomal aberration test in human peripheral blood lymphocytes with or without metabolic activation, or in the in vivo micronucleus test in rats.

Solifenacin was evaluated in four twelve-week, double-blind, randomized, placebo-controlled, parallel group, multicenter clinical trials for the treatment of overactive bladder in patients having symptoms of urinary frequency, urgency, and/or urge or mixed incontinence (with a predominance of urge). Entry criteria required that patients have symptoms of overactive bladder for ≥ 3 months duration. These studies involved 3027 patients (1811 on Solifenacin and 1216 on placebo), and approximately 90% of these patients completed the 12-week studies. Two of the four studies evaluated the 5 and 10 mg Solifenacin doses and the other two evaluated only the 10 mg dose. All patients completing the 12-week studies were eligible to enter an open label, long term extension study and 81% of patients enrolling completed the additional 40-week treatment period. The majority of patients were Caucasian (93%) and female (80%) with a mean age of 58 years.

The results for the primary and secondary endpoints in the four individual 12-week clinical studies of Solifenacin are reported in Tables 3 through 6.

Solifenacin Succinate Tablets is supplied as round film-coated tablets, biconvex, debossed on the obverse and reverse sides as follows:

*Reverse sides are plain for all three strengths.

Patients should be informed that solifenacin may produce angioedema, which could result in life-threatening airway obstruction. Patients should be advised to promptly discontinue solifenacin therapy and seek immediate attention if they experience edema of the tongue or laryngopharynx, or difficulty breathing. 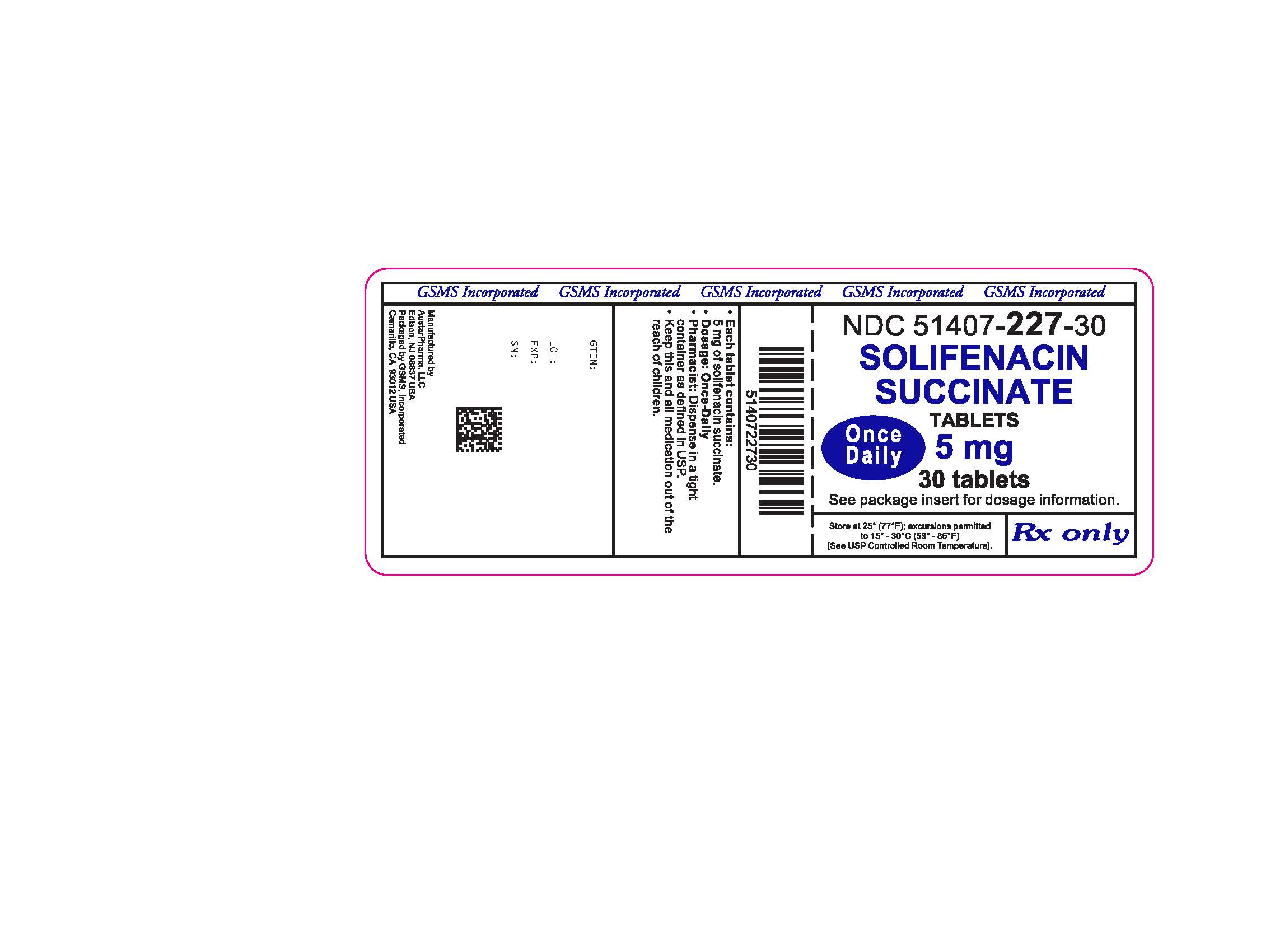 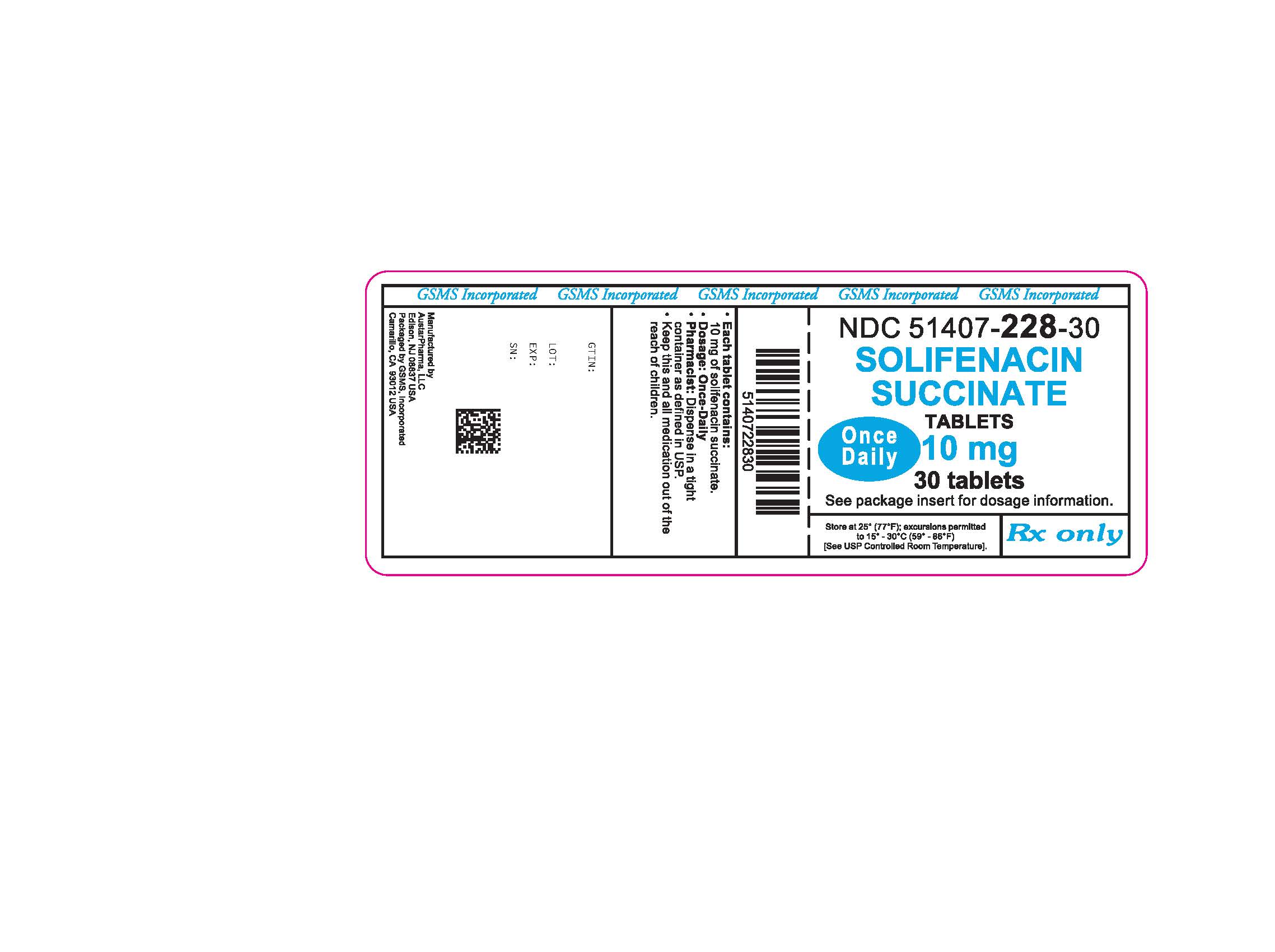