If you are not able to press and release 10 sprays from the GIMOTI nasal spray, call your healthcare provider or pharmacist.

The GIMOTI nasal spray bottle is now ready for use.

If the spray pump nozzle becomes clogged, remove it for cleaning by grasping the base of the spray nozzle and pulling up. 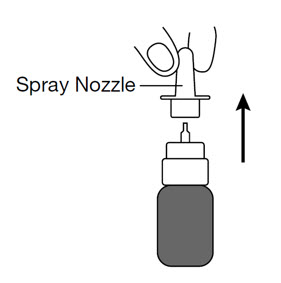 The used GIMOTI nasal spray may be thrown away (discarded) in the household trash.

Manufactured for Evoke Pharma, Inc. by Patheon, a Division of Thermo Fisher.

These Instructions for Use have been approved by the U.S. Food and Drug Administration
Approved: June 2020

© 2021 FDA.report
This site is not affiliated with or endorsed by the FDA.