In all leflunomide trials, participants of at least 18 years of age and in ARA functional class of I, II or III received an initial loading dosage of 100 mg leflunomide per day for three days, followed by 20 mg per day thereafter.

Exclusion criteria included patients with a history of hypersensitivity to the study medication; women who were pregnant or breast-feeding and men or women of child bearing age and potential who had not received contraceptives for at least 4 weeks before entering the study and to be maintained throughout the study and for at least 6 months after discontinuing treatment; Patients with a history of inflammatory disease, impaired renal function or liver impairment, cardiac failure, congenital or acquired immunodeficiency, impaired coagulation, or a history of recent major traumatic injury; patients taking intra-articular or systemic concomitant medications which could affect the safety and/or efficacy of the study medication.

Trial 2 randomized 358 patients with active RA to leflunomide 20 mg/day (n=133), sulfasalazine 2.0 g/day (n=133), or placebo (n=92). Treatment duration was 24 weeks. An extension of the study was an optional 6-month blinded continuation of Trial 2 without the placebo arm, resulting in a 12-month comparison of leflunomide and sulfasalazine.

Figure 1. Percentage of ACR20 Responders at Endpoint in Patients with Active RA in Trials 1, 2, and 3 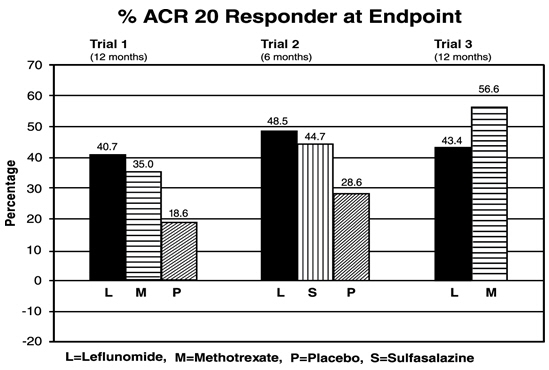 Figure 2. ACR20 Responders over Time in Patients with Active RA in Trial 1* 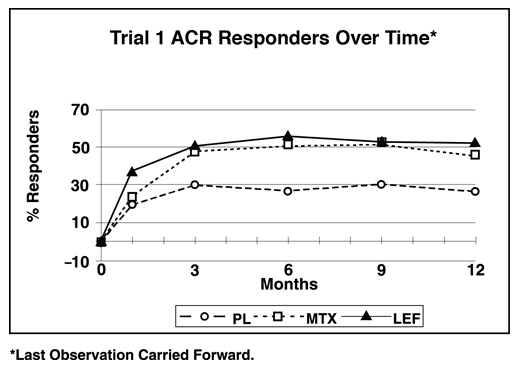 ACR50 and ACR70 Responders are defined in an analogous manner to the ACR 20 Responder, but use improvements of 50% or 70%, respectively (Table 3). Mean change for the individual components of the ACR Responder Index are shown in Table 4.

Improvement from baseline in the individual components of the ACR responder criteria was also sustained in most patients during the second year of leflunomide treatment in all three trials.

Figure 3. Change in Sharp Score in Patients with Active RA in Trials 1, 2, and 3 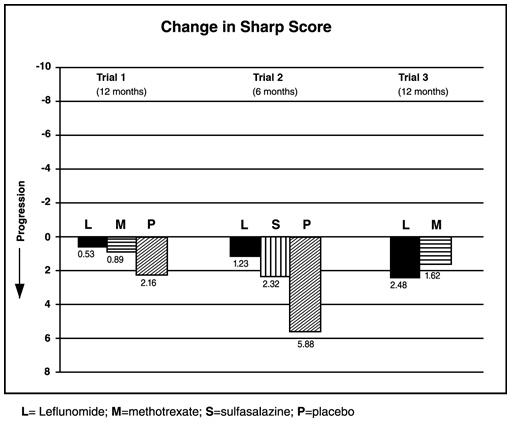 The Health Assessment Questionnaire (HAQ) assesses a patient's physical function and degree of disability. The mean change from baseline in functional ability as measured by the HAQ Disability Index (HAQ DI) in the 6 and 12 month placebo and active controlled trials is shown in Figure 4. Leflunomide was statistically significantly superior to placebo in improving physical function. Superiority to placebo was demonstrated consistently across all eight HAQ DI subscales (dressing, arising, eating, walking, hygiene, reach, grip and activities) in both placebo controlled studies.

Figure 4. Change in Functional Ability Measure in Patients with Active RA in Trials 1, 2, and 3* 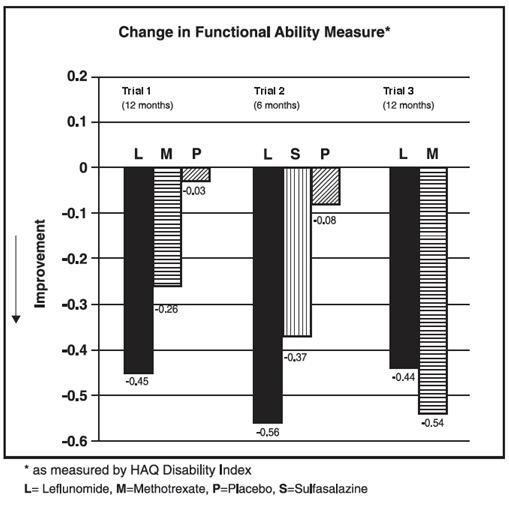 © 2020 FDA.report
This site is not affiliated with or endorsed by the FDA.