Lidocaine Hydrochloride Injection, USP is a sterile, nonpyrogenic solution of an antiarrhythmic agent administered intravenously by either direct injection or continuous infusion. It is available in various concentrations with the following characteristics: 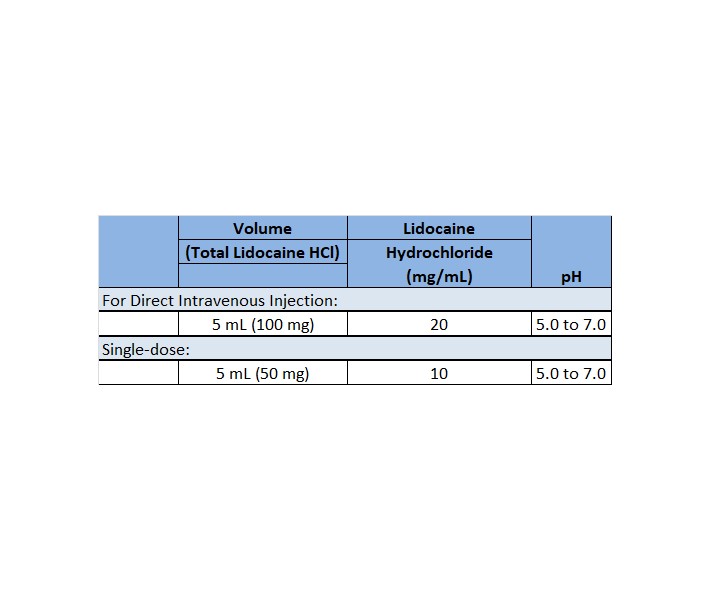 Lidocaine Hydrochloride, USP is chemically designated 2-(Diethylamino)-2',6'-acetoxylidide monohydrochloride monohydrate, a white powder freely soluble in water. The molecular formula is C14H22N2O HCl H2O. The molecular weight is 288.82. It has the following structural formula:

The semi-rigid vial used for the plastic vials is fabricated from a specially formulated polyolefin. It is a copolymer of ethylene and propylene. The safety of the plastic has been confirmed by tests in animals according to USP biological standards for plastic containers. The container requires no vapor barrier to maintain the proper drug concentration.

The plastic syringe is molded from a specially formulated polypropylene. Water permeates from inside the container at an extremely slow rate which will have an insignificant effect on solution concentration over the expected shelf life. Solutions in contact with the plastic container may leach out certain chemical components from the plastic in very small amounts; however, biological testing was supportive of the safety of the syringe material.

Mechanism of Action and Electrophysiology:

At therapeutic doses, lidocaine has minimal hemodynamic effects in normal subjects and in patients with heart disease. Lidocaine has been shown to cause no, or minimal decrease in ventricular contractility, cardiac output, arterial pressure or heart rate.

Lidocaine is rapidly metabolized by the liver and less than 10% of a dose is excreted unchanged in the urine. Oxidative N-dealkylation, a major pathway of metabolism, results in the metabolites monoethylglycinexylidide and glycinexylidide. The pharmacological/toxicological activities of these metabolites are similar to but less potent than lidocaine. The primary metabolite in urine is a conjugate of 4-hydroxy-2, 6-dimethylaniline.

The elimination half-life of lidocaine following an intravenous bolus injection is typically 1.5 to 2 hours. There are data that indicate that the half-life may be 3 hours or longer following infusions of greater than 24 hours.

Because of the rapid rate at which lidocaine is metabolized, any condition that alters liver function, including changes in liver blood flow, which could result from severe congestive heart failure or shock may alter lidocaine kinetics. The half-life may be two-fold or more greater in patients with liver dysfunction. Renal dysfunction does not affect lidocaine kinetics, but may increase the accumulation of metabolites.

Lidocaine readily crosses the placental and blood-brain barriers. Dialysis has negligible effects on the kinetics of lidocaine.

Lidocaine hydrochloride injection administered intravenously or intramuscularly, is specifically indicated in the acute management of ventricular arrhythmias such as those occurring in relation to acute myocardial infarction, or during cardiac manipulation, such as cardiac surgery.

Lidocaine hydrochloride is contraindicated in patients with a known history of hypersensitivity to local anesthetics of the amide type. Lidocaine hydrochloride should not be used in patients with Stokes-Adams syndrome, Wolff-Parkinson-White syndrome or with severe degrees of sinoatrial, atrioventricular or intraventricular block in the absence of an artificial pacemaker.

IN ORDER TO MANAGE POSSIBLE ADVERSE REACTIONS, RESUSCITATIVE EQUIPMENT, OXYGEN AND OTHER RESUSCITATIVE DRUGS SHOULD BE IMMEDIATELY AVAILABLE WHEN LIDOCAINE HYDROCHLORIDE INJECTION IS USED.

Systemic toxicity may result in manifestations of central nervous system depression (sedation) or irritability (twitching), which may progress to frank convulsions accompanied by respiratory depression and/or arrest. Early recognition of premonitory signs, assurance of adequate oxygenation and, where necessary, establishment of artificial airway with ventilatory support are essential to management of this problem. Should convulsions persist despite ventilatory therapy with oxygen, small increments of anticonvulsant drugs may be used intravenously. Examples of such agents include benzodiazepines (e.g., diazepam), ultrashort-acting barbiturates (e.g., thiopental or thiamylal) or a short-acting barbiturate (e.g., pentobarbital or secobarbital). If the patient is under anesthesia, a short-acting muscle relaxant (e.g., succinylcholine) may be used. Longer acting drugs should be used only when recurrent convulsions are evidenced.

Should circulatory depression occur, vasopressors may be used.

Constant electrocardiographic monitoring is essential to the proper administration of lidocaine hydrochloride. Signs of excessive depression of cardiac electrical activity such as sinus node dysfunction, prolongation of the P-R interval and QRS complex or the appearance or aggravation of arrhythmias, should be followed by flow adjustment and, if necessary, prompt cessation of the intravenous infusion of this agent. Occasionally, acceleration of ventricular rate may occur when lidocaine hydrochloride is administered to patients with atrial flutter or fibrillation.

Caution should be employed in the use of lidocaine hydrochloride in patients with severe liver or kidney disease because accumulation of the drug or metabolites may occur.

Lidocaine Hydrochloride Injection, USP should be used with caution in the treatment of patients with hypovolemia, severe congestive heart failure, shock and all forms of heart block. In patients with sinus bradycardia or incomplete heart block, the administration of lidocaine hydrochloride intravenously for the elimination of ventricular ectopic beats without prior acceleration in heart rate (e.g., by atropine, isoproterenol or electric pacing) may promote more frequent and serious ventricular arrhythmias or complete heart block (see CONTRAINDICATIONS).

Dosage should be reduced for pediatric patients and for debilitated and/or elderly patients, commensurate with their age and physical status.

The safety of amide local anesthetic agents in patients with genetic predisposition of malignant hyperthermia has not been fully assessed; therefore, lidocaine should be used with caution in such patients.

In hospital environments where drugs known to be triggering agents for malignant hyperthermia (fulminant hypermetabolism) are administered, it is suggested that a standard protocol for management should be available.

It is not known whether lidocaine may trigger this reaction; however, large doses resulting in significant plasma concentrations, as may be achieved by intravenous infusion, pose potential risk to these individuals. Recognition of early unexplained signs of tachycardia, tachypnea, labile blood pressure and metabolic acidosis may precede temperature elevation. Successful outcome is dependent on early diagnosis, prompt discontinuance of the triggering agent and institution of treatment including oxygen therapy, supportive measures and dantrolene (for details see dantrolene package insert).

The patient should be advised of the possible occurrence of the experiences listed under ADVERSE REACTIONS.

Lidocaine Hydrochloride Injection, USP should be used with caution in patients with digitalis toxicity accompanied by atrioventricular block. Concomitant use of beta-blocking agents or cimetidine may reduce hepatic blood flow and thereby reduce lidocaine clearance. The concomitant use of these two agents may cause an increased incidence of adverse reactions, including central nervous system adverse reactions such as seizure.

Long term studies in animals to evaluate the carcinogenic and mutagenic potential or the effect on fertility of lidocaine HCl have not been conducted.

Teratogenic Effects: Reproduction studies have been performed in rats at doses up to 6.6 times the maximum human doses and have revealed no significant findings. There are, however, no adequate and well-controlled studies in pregnant women. Because animal reproduction studies are not always predictive of human response, this drug should be used during pregnancy only if clearly needed.

The effects of lidocaine HCl on the mother and the fetus, when used in the management of cardiac arrhythmias during labor and delivery are not known. Lidocaine readily crosses the placental barrier.

Controlled clinical studies have not been conducted in the pediatric population to establish safety and efficacy in this population (see DOSAGE AND ADMINISTRATION).

Central Nervous System: CNS reactions are excitatory and/or depressant and may be characterized by light-headedness, nervousness, apprehension, euphoria, confusion, dizziness, drowsiness, tinnitus, blurred or double vision, vomiting, sensations of heat, cold or numbness, twitching, tremors, convulsions, unconsciousness, respiratory depression and arrest. The excitatory reactions may be very brief or may not occur at all, in which case, the first manifestation of toxicity may be drowsiness, merging into unconsciousness and respiratory arrest.

Cardiovascular System: Cardiovascular reactions are usually depressant in nature and are characterized by bradycardia, hypotension and cardiovascular collapse, which may lead to cardiac arrest.

Allergic reactions as a result of sensitivity to lidocaine are extremely rare and, if they occur, should be managed by conventional means.

Although specific studies have not been conducted, lidocaine HCl has been used clinically without evidence of abuse of this drug or of psychological or physical dependence as a result of its use.

Should convulsions or signs of respiratory depression and arrest develop, the patency of the airway and adequacy of ventilation must be assured immediately. Should convulsions persist despite ventilatory therapy with oxygen, small increments of anticonvulsive agents may be given intravenously. Examples of such agents include a benzodiazepine (e.g., diazepam), an ultrashort-acting barbiturate (e.g., thiopental or thiamylal) or a short-acting barbiturate (e.g., pentobarbital or secobarbital). If the patient is under general anesthesia, a short-acting muscle relaxant (e.g., succinylcholine) may be administered.

Should circulatory depression occur, vasopressors may be used. Should cardiac arrest occur, standard CPR procedures should be instituted.

Dialysis is of negligible value in the treatment of acute overdosage from lidocaine HCl.

Single Direct Intravenous Injection (bolus): ONLY THE 5 mL, 50 MG or 100 MG DOSAGE SIZES should be used for direct intravenous injection. The usual dose is 50 to 100 mg of lidocaine hydrochloride (0.70 to 1.4 mg/kg; 0.32 to 0.63 mg/lb) administered intravenously under ECG monitoring. This dose may be administered at the rate of approximately 25 to 50 mg/min (0.35 to 0.70 mg/kg/min; 0.16 to 0.32 mg/lb/min). Sufficient time should be allowed to enable a slow circulation to carry the drug to the site of action. If the initial injection of 50 to 100 mg does not produce a desired response, a second dose may be injected after five minutes. NO MORE THAN 200 TO 300 MG OF LIDOCAINE HYDROCHLORIDE SHOULD BE ADMINISTERED DURING A ONE HOUR PERIOD.

When administering lidocaine hydrochloride (or any potent medication) by continuous intravenous infusion, it is advisable to use a precision volume control I.V. set.

Pediatric: Controlled clinical studies in the pediatric population to establish dosing schedules have not been conducted. The American Heart Association's Standards and Guidelines recommends a bolus dose of 1 mg/kg, and an infusion rate of between 20-50 mcg/kg/min for prolonged therapy. When drug clearance is reduced, as in patients with shock, congestive heart failure or cardiac arrest, the infusion rate should not exceed 20 mcg/kg/min.

NOTE: Regarding Prolonged Infusions: There are data that indicate the half-life may be 3 hours or longer following infusions of greater than 24 hours in duration. Do not use if solution is discolored or cloudy.

Parenteral drug products should be inspected visually for particulate matter and discoloration prior to administration whenever solution and container permit.

To prevent needle-stick injuries, needles should not be recapped, purposely bent or broken by hand. 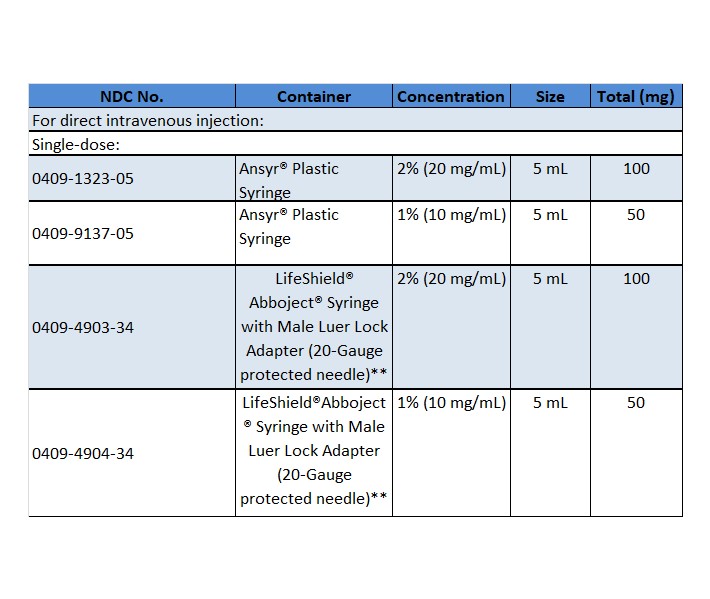 **Abboject® Unit of Use Syringe with Male Luer Lock Adapter and protected needle.

Abboject® is a trademark of the Abbott group of companies.

Glass
ABBOJECT®
Unit of Use Syringe

◀ PRESS AND PULL TO OPEN 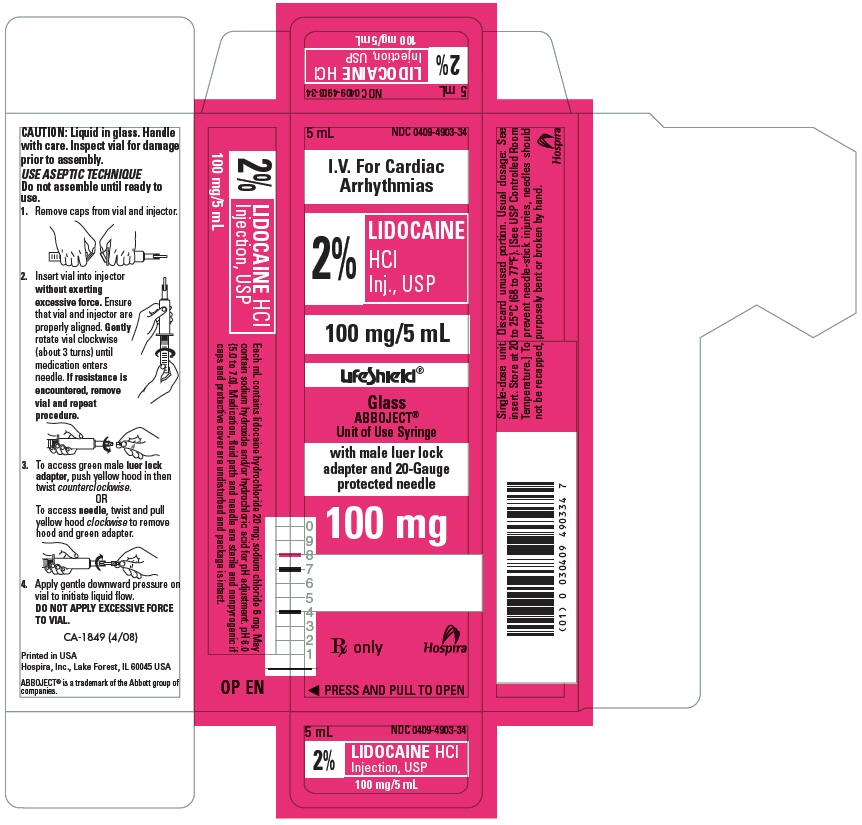 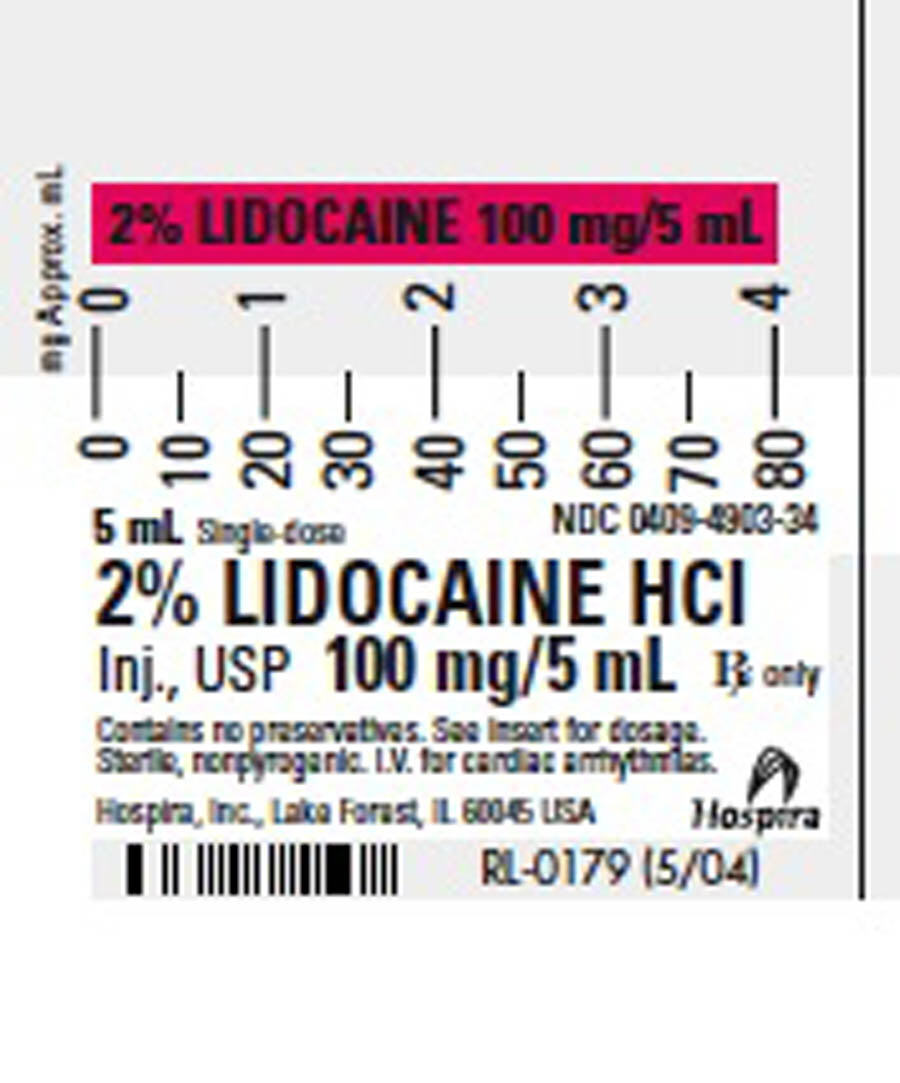