Figure 1 presents the proportion of patients (X-axis) whose percentage reduction from baseline in the all partial seizure rate was at least as great as that indicated on the Y-axis in the second and third placebo-controlled trials. A positive value on the Y-axis indicates an improvement from baseline (i.e., a decrease in seizure rate), while a negative value indicates a worsening from baseline (i.e., an increase in seizure rate). Thus, in a display of this type, the curve for an effective treatment is shifted to the left of the curve for placebo. The proportion of patients achieving any particular level of reduction in seizure rate was consistently higher for the zonisamide groups compared to the placebo groups. For example, Figure 1 indicates that approximately 27% of patients treated with zonisamide experienced a 75% or greater reduction, compared to approximately 12% in the placebo groups. 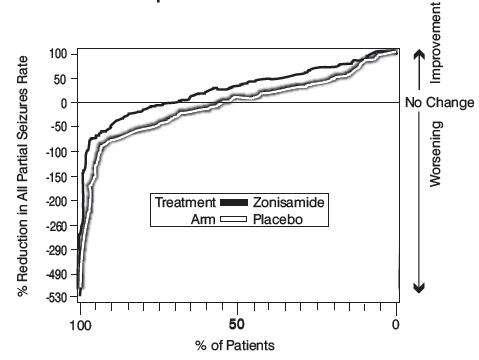 No differences in efficacy based on age, sex or race, as measured by a change in seizure frequency from baseline, were detected.

© 2022 FDA.report
This site is not affiliated with or endorsed by the FDA.