Lithium toxicity is closely related to serum lithium levels, and can occur at doses close to therapeutic levels. Facilities for prompt and accurate serum lithium determinations should be available before initiating therapy (see DOSAGE AND ADMINISTRATION).


Preclinical studies have shown that lithium alters sodium transport in nerve and muscle cells and effects a shift toward intraneuronal metabolism of catecholamines, but the specific biochemical mechanism of lithium action in mania is unknown.


Lithium carbonate extended-release tablets, USP  is indicated in the treatment of manic episodes of Bipolar Disorder. Bipolar Disorder, Manic (DSM-IV) is equivalent to Manic Depressive illness, Manic, in the older DSM-II terminology. Lithium carbonate extended-release tablets, USP is also indicated as a maintenance treatment for individuals with a diagnosis of Bipolar Disorder. Maintenance therapy reduces the frequency of manic episodes and diminishes the intensity of those episodes which may occur.

Typical symptoms of mania include pressure of speech, motor hyperactivity, reduced need for sleep, flight of ideas, grandiosity, elation, poor judgment, aggressiveness, and possibly hostility. When given to a patient experiencing a manic episode, lithium may produce a normalization of symptomatology within 1 to 3 weeks.


The toxic concentrations for lithium (≥1.5 mEq/L) are close to the therapeutic range (0.8 to 1.2 mEq/L). Some patients abnormally sensitive to lithium may exhibit toxic signs at serum concentrations that are considered within the therapeutic range (see BOXED WARNING and DOSAGE AND ADMINISTRATION). Lithium may take up to 24 hours to distribute into brain tissue, so occurrence of acute toxicity symptoms may be delayed.


The risk of lithium toxicity is increased by:

Cases of pseudotumor cerebri (increased intracranial pressure and papilledema) have been reported with lithium use. If undetected, this condition may result in enlargement of the blind spot, constriction of visual fields, and eventual blindness due to optic atrophy. Lithium should be discontinued, if clinically possible, if this syndrome occurs.

Kidney function should be assessed prior to and during lithium therapy. Routine urinalysis and other tests may be used to evaluate tubular function (e.g., urine specific gravity or osmolality following a period of water deprivation, or 24-hour urine volume) and glomerular function (e.g., serum creatinine, creatinine clearance or proteinuria). During lithium therapy, progressive or sudden changes in renal function, even within the normal range, indicate the need for re-evaluation of treatment.

An encephalopathic syndrome (characterized by weakness, lethargy, fever, tremulousness and confusion, extrapyramidal symptoms, leukocytosis, elevated serum enzymes, BUN, and FBS) has occurred in a few patients treated with lithium plus a neuroleptic, most notably haloperidol. In some instances, the syndrome was followed by irreversible brain damage. Because of possible causal relationship between these events and the concomitant administration of lithium and neuroleptic drugs, patients receiving such combined therapy or patients with organic brain syndrome or other CNS impairment should be monitored closely for early evidence of neurologic toxicity and treatment discontinued promptly if such signs appear. This encephalopathic syndrome may be similar to or the same as Neuroleptic Malignant Syndrome (NMS).


Monitor all patients taking lithium for the emergence of serotonin syndrome. Discontinue treatment with lithium and any concomitant serotonergic agents immediately if the above symptoms occur and initiate supportive symptomatic treatment. If concomitant use of lithium with other serotonergic drugs is clinically warranted, inform patients of the increased risk for serotonin syndrome and monitor for symptoms.

Concomitant Use with Neuromuscular Blocking Agents

Adverse effects on nidation in rats, embryo viability in mice, and metabolism in vitro of rat testis and human spermatozoa have been attributed to lithium, as have teratogenicity in submammalian species and cleft palate in mice.

In humans, lithium may cause fetal harm when administered to a pregnant woman. Data from lithium birth registries suggest an increase in cardiac and other anomalies, especially Ebstein’s anomaly. If this drug is used in women of childbearing potential, or during pregnancy, or if a patient becomes pregnant while taking this drug, the patient should be apprised by their physician of the potential hazard to the fetus.

Lithium is excreted in human milk. Nursing should not be undertaken during lithium therapy except in rare and unusual circumstances where, in the view of the physician, the potential benefits to the mother outweigh possible hazard to the infant or neonate. Signs and symptoms of lithium toxicity such as hypertonia, hypothermia, cyanosis, and ECG changes have been reported in some infants and neonates.

Safety and effectiveness in pediatric patients under 12 years of age have not been determined; its use in these patients is not recommended.

There has been a report of transient syndrome of acute dystonia and hyperreflexia occurring in a 15 kg pediatric patient who ingested 300 mg of lithium carbonate.


The ability to tolerate lithium is greater during the acute manic phase and decreases when manic symptoms subside (see DOSAGE AND ADMINISTRATION).

The distribution space of lithium approximates that of total body water. Lithium is primarily excreted in urine with insignificant excretion in feces. Renal excretion of lithium is proportional to its plasma concentration. The elimination half-life of lithium is approximately 24 hours. Lithium decreases sodium reabsorption by the renal tubules which could lead to sodium depletion. Therefore, it is essential for the patient to maintain a normal diet, including salt, and an adequate fluid intake (2500 to 3500 mL) at least during the initial stabilization period. Decreased tolerance to lithium has been reported to ensue from protracted sweating or diarrhea and, if such occur, supplemental fluid and salt should be administered under careful medical supervision and lithium intake reduced or suspended until the condition is resolved.

In addition to sweating and diarrhea, concomitant infection with elevated temperatures may also necessitate a temporary reduction or cessation of medication.

Previously existing thyroid disorders do not necessarily constitute a contraindication to lithium treatment. Where hypothyroidism preexists, careful monitoring of thyroid function during lithium stabilization and maintenance allows for correction of changing thyroid parameters and/or adjustment of lithium doses, if any. If hypothyroidism occurs during lithium stabilization and maintenance, supplemental thyroid treatment may be used.


Concomitant administration of methyldopa, phenytoin, or carbamazepine with lithium may increase the risk of adverse reactions with these drugs.


Concurrent use of calcium channel blocking agents with lithium may increase the risk of neurotoxicity in the form of ataxia, tremors, nausea, vomiting, diarrhea, and/or tinnitus.


Concurrent use of metronidazole with lithium may provoke lithium toxicity due to reduced renal clearance. Patients receiving such combined therapy should be monitored closely.


Concurrent use of fluoxetine with lithium has resulted in both increased and decreased serum lithium concentrations. Patients receiving such combined therapy should be monitored closely.


Nonsteroidal anti-inflammatory drugs (NSAIDs): Lithium levels should be closely monitored when patients initiate or discontinue NSAID use. In some cases, lithium toxicity has resulted from interactions between a NSAID and lithium. Indomethacin and piroxicam have been reported to increase significantly steady-state plasma lithium concentrations. There is also evidence that other nonsteroidal anti-inflammatory agents, including the selective cyclooxygenase-2 (COX-2) inhibitors, have the same effect. In a study conducted in healthy subjects, mean steady-state lithium plasma levels increased approximately 17% in subjects receiving lithium 450 mg BID with celecoxib 200 mg BID as compared to subjects receiving lithium alone.


Lithium may impair mental and/or physical abilities. Patients should be cautioned about activities requiring alertness (e.g., operating vehicles or machinery).

Because of the potential for serious adverse reactions in nursing infants and neonates from lithium, a decision should be made whether to discontinue nursing or to discontinue the drug, taking into account the importance of the drug to the mother (see WARNINGS).


Safety and effectiveness in pediatric patients below the age of 12 have not been established (see WARNINGS).


Clinical studies of lithium carbonate extended-release  tablets did not include sufficient numbers of subjects aged 65 and over to determine whether they respond differently from younger subjects. Other reported clinical experience has not identified differences in responses between the elderly and younger patients. In general, dose selection for an elderly patient should be cautious, usually starting at the low end of the dosing range, reflecting the greater frequency of decreased hepatic, renal, or cardiac function, and of concomitant disease or other therapy.

This drug is known to be substantially excreted by the kidney, and the risk of toxic reactions to this drug may be greater in patients with impaired renal function. Because elderly patients are more likely to have decreased renal function, care should be taken in dose selection, and it may be useful to monitor renal function.


The occurrence and severity of adverse reactions are generally directly related to serum lithium concentrations and to individual patient sensitivity to lithium. They generally occur more frequently and with greater severity at higher concentrations.

Fine hand tremor, polyuria, and mild thirst may occur during initial therapy for the acute manic phase and may persist throughout treatment. Transient and mild nausea and general discomfort may also appear during the first few days of lithium administration.

The following reactions have been reported and appear to be related to serum lithium concentrations, including concentrations within the therapeutic range:

Thyroid Abnormalities: euthyroid goiter and/or hypothyroidism (including myxedema) accompanied by lower T3 and T4. 131Iodine uptake may be elevated (see PRECAUTIONS). Paradoxically, rare cases of hyperthyroidism have been reported.

Some reports of nephrogenic diabetes insipidus, hyperparathyroidism, and hypothyroidism which persist after lithium discontinuation have been received.

A few reports have been received of the development of painful discoloration of fingers and toes and coldness of the extremities within one day of starting lithium treatment. The mechanism through which these symptoms (resembling Raynaud’s Syndrome) developed is not known. Recovery followed discontinuance.


The toxic concentrations for lithium (≥1.5 mEq/ L) are close to the therapeutic concentrations. It is therefore important that patients and their families be cautioned to watch for early toxic symptoms and to discontinue the drug and inform the physician should they occur (see WARNINGS: Lithium Toxicity).


Optimal patient response can usually be established with 1800 mg/day in the following dosages:

1Can also be administered on 600 mg TID recommended dosing interval.

Desirable serum lithium concentrations are 0.6 to 1.2 mEq/L which can usually be achieved with 900 to 1200 mg/day. Dosage will vary from one individual to another, but generally the following dosages will maintain this concentration:


1Can be administered on TID recommended dosing interval up to 1200 mg/day.

Serum lithium concentrations in uncomplicated cases receiving maintenance therapy during remission should be monitored at least every two months. Patients abnormally sensitive to lithium may exhibit toxic signs at serum concentrations of 1 to 1.5 mEq/L. Geriatric patients often respond to reduced dosage, and may exhibit signs of toxicity at serum concentrations ordinarily tolerated by other patients. In general, dose selection for an elderly patient should be cautious, usually starting at the low end of the dosing range, reflecting the greater frequency of decreased hepatic, renal, or cardiac function, and of concomitant disease or other drug therapy.

No specific antidote for lithium poisoning is known. Treatment is supportive. Early symptoms of lithium toxicity can usually be treated by reduction or cessation of dosage of the drug and resumption of the treatment at a lower dose after 24 to 48 hours. In severe cases of lithium poisoning, the first and foremost goal of treatment consists of elimination of this ion from the patient.


Treatment is essentially the same as that used in barbiturate poisoning: 1) gastric lavage, 2) correction of fluid and electrolyte imbalance and, 3) regulation of kidney functioning. Urea, mannitol, and aminophylline all produce significant increases in lithium excretion. Hemodialysis is an effective and rapid means of removing the ion from the severely toxic patient. However, patient recovery may be slow.


Lithium carbonate extended-release  tablets USP, 300 mg are peach colored, round shaped, film coated tablets debossed with “104” on one side and “L” on the other side.

Call your doctor for medical advice about side effects. You may report side effects to FDA at 1-800-FDA-1088. 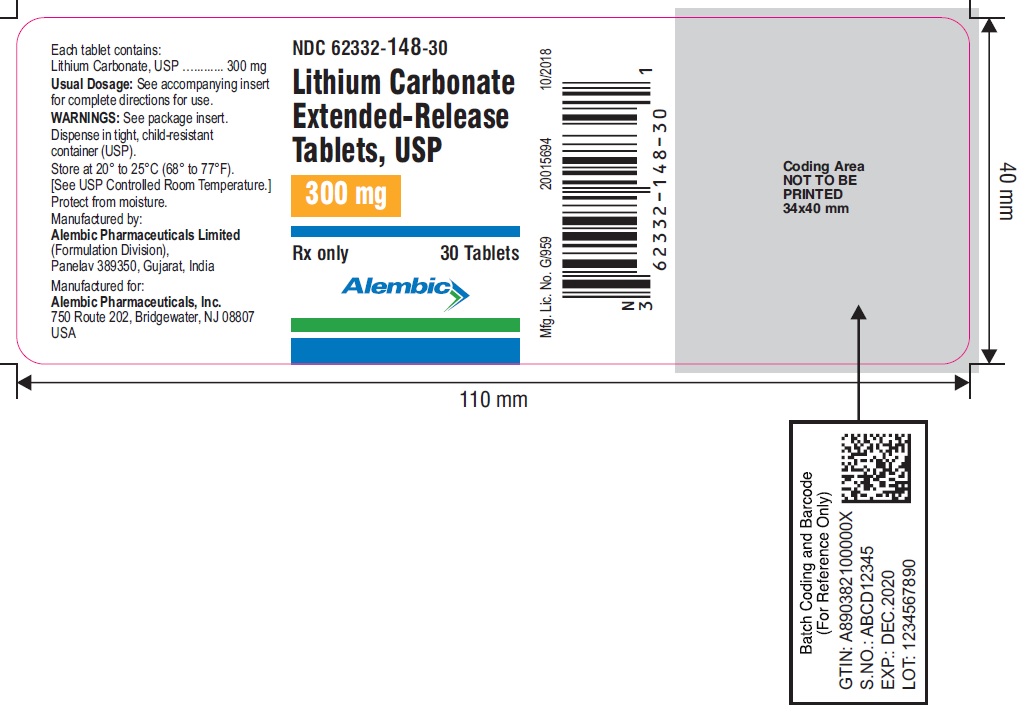