WARNING: RISKS FROM CONCOMITANT USE WITH OPIOIDS

Concomitant use of benzodiazepines and opioids may result in profound sedation, respiratory depression, coma, and death [see WARNINGS, DRUG INTERACTIONS].

Chlordiazepoxide hydrochloride is 7-chloro-2- (methylamino)-5-phenyl-3 H-1,4-benzodiazepine 4-oxide hydrochloride. A white to practically white crystalline substance, it is soluble in water. It is unstable in solution and the powder must be protected from light. The structural formula is:

Chlordiazepoxide HCl has antianxiety, sedative, appetite-stimulating and weak analgesic actions. The precise mechanism of action is not known. The drug blocks EEG arousal from stimulation of the brain stem reticular formation. It takes several hours for peak blood levels to be reached and the half-life of the drug is between 24 and 48 hours. After the drug is discontinued plasma levels decline slowly over a period of several days. Chlordiazepoxide is excreted in the urine, with 1% to 2% unchanged and 3% to 6% as conjugate.

The drug has been studied extensively in many species of animals and these studies are suggestive of action on the limbic system of the brain, which recent evidence indicates is involved in emotional responses.

Hostile monkeys were made tame by oral drug doses which did not cause sedation. Chlordiazepoxide HCl revealed a “taming” action with the elimination of fear and aggression. The taming effect of chlordiazepoxide HCl was further demonstrated in rats made vicious by lesions in the septal area of the brain. The drug dosage which effectively blocked the vicious reaction was well below the dose which caused sedation in these animals.

Reproduction studies in rats fed 10, 20 and 80 mg/kg daily and bred through one or two matings showed no congenital anomalies, nor were there adverse effects on lactation of the dams or growth of the newborn. However, in another study at 100 mg/kg daily there was noted a significant decrease in the fertilization rate and a marked decrease in the viability and body weight of off-spring which may be attributable to sedative activity, thus resulting in lack of interest in mating and lessened maternal nursing and care of the young. One neonate in each of the first and second matings in the rat reproduction study at the 100 mg/kg dose exhibited major skeletal defects. Further studies are in progress to determine the significance of these findings.

Chlordiazepoxide HCl capsules are indicated for the management of anxiety disorders or for the short term relief of symptoms of anxiety, withdrawal symptoms of acute alcoholism, and preoperative apprehension and anxiety. Anxiety or tension associated with the stress of everyday life usually does not require treatment with an anxiolytic.

The effectiveness of chlordiazepoxide HCl capsules in long term use, that is, more than 4 months, has not been assessed by systematic clinical studies. The physician should periodically reassess the usefulness of the drug for the individual patient.

Chlordiazepoxide HCl capsules are contraindicated in patients with known hypersensitivity to the drug.

Concomitant use of benzodiazepines, including chlordiazepoxide, and opioids may result in profound sedation, respiratory depression, coma, and death. Because of these risks, reserve concomitant prescribing of these drugs for use in patients for whom alternative treatment options are inadequate.

Observational studies have demonstrated that concomitant use of opioid analgesics and benzodiazepines increases the risk of drug-related mortality compared to use of opioids alone. If a decision is made to prescribe chlordiazepoxide concomitantly with opioids, prescribe the lowest effective dosages and minimum durations of concomitant use, and follow patients closely for signs and symptoms of respiratory depression and sedation. In patients already receiving an opioid analgesic, prescribe a lower initial dose of chlordiazepoxide than indicated in the absence of an opioid and titrate based on clinical response. If an opioid is initiated in a patient already taking chlordiazepoxide, prescribe a lower initial dose of the opioid and titrate based upon clinical response.

Advise both patients and caregivers about the risks of respiratory depression and sedation when chlordiazepoxide is used with opioids. Advise patients not to drive or operate heavy machinery until the effects of concomitant use with the opioid have been determined (see DRUG INTERACTIONS).

Chlordiazepoxide HCl may impair the mental and/or physical abilities required for the performance of potentially hazardous tasks such as driving a vehicle or operating machinery. Similarly, it may impair mental alertness in children. The concomitant use of alcohol or other central nervous system depressants may have an additive effect. PATIENTS SHOULD BE WARNED ACCORDINGLY.

An increased risk of congenital malformations associated with the use of minor tranquilizers (chlordiazepoxide, diazepam and meprobamate) during the first trimester of pregnancy has been suggested in several studies. Because use of these drugs is rarely a matter of urgency, their use during this period should almost always be avoided. The possibility that a woman of childbearing potential may be pregnant at the time of institution of therapy should be considered. Patients should be advised that if they become pregnant during therapy or intend to become pregnant they should communicate with their physicians about the desirability of discontinuing the drug.

Withdrawal symptoms of the barbiturate type have occurred after the discontinuation of benzodiazepines (see DRUG ABUSE AND DEPENDENCE section).

In elderly and debilitated patients, it is recommended that the dosage be limited to the smallest effective amount to preclude the development of ataxia or oversedation (10 mg or less per day initially, to be increased gradually as needed and tolerated). In general, the concomitant administration of chlordiazepoxide HCl and other psychotropic agents is not recommended. If such combination therapy seems indicated, careful consideration should be given to the pharmacology of the agents to be employed — particularly when the known potentiating compounds such as MAO inhibitors and phenothiazines are to be used. The usual precautions in treating patients with impaired renal or hepatic function should be observed.

To assure the safe and effective use of benzodiazepines, patients should be informed that, since benzodiazepines may produce psychological and physical dependence, it is advisable that they consult with their physician before either increasing the dose or abruptly discontinuing this drug.

The necessity of discontinuing therapy because of undesirable effects has been rare. Drowsiness, ataxia and confusion have been reported in some patients — particularly the elderly and debilitated. While these effects can be avoided in almost all instances by proper dosage adjustment, they have occasionally been observed at the lower dosage ranges. In a few instances syncope has been reported.

Other adverse reactions reported during therapy include isolated instances of skin eruptions, edema, minor menstrual irregularities, nausea and constipation, extrapyramidal symptoms, as well as increased and decreased libido. Such side effects have been infrequent, and are generally controlled with reduction of dosage. Changes in EEG patterns (low-voltage fast activity) have been observed in patients during and after chlordiazepoxide HCl treatment.

Blood dyscrasias (including agranulocytosis), jaundice and hepatic dysfunction have occasionally been reported during therapy. When chlordiazepoxide HCl treatment is protracted, periodic blood counts and liver function tests are advisable.

Chlordiazepoxide hydrochloride capsules are classified by the Drug Enforcement Administration as a Schedule IV controlled substance.

Withdrawal symptoms, similar in character to those noted with barbiturates and alcohol (convulsions, tremor, abdominal and muscle cramps, vomiting and sweating), have occurred following abrupt discontinuance of chlordiazepoxide. The more severe withdrawal symptoms have usually been limited to those patients who had received excessive doses over an extended period of time. Generally milder withdrawal symptoms (e.g., dysphoria and insomnia) have been reported following abrupt discontinuance of benzodiazepines taken continuously at therapeutic levels for several months. Consequently, after extended therapy, abrupt discontinuation should generally be avoided and a gradual dosage tapering schedule followed. Addiction-prone individuals (such as drug addicts or alcoholics) should be under careful surveillance when receiving chlordiazepoxide or other psychotropic agents because of the predisposition of such patients to habituation and dependence.

Manifestations of chlordiazepoxide overdosage includes somnolence, confusion, coma and diminished reflexes. Respiration, pulse and blood pressure should be monitored, as in all cases of drug overdosage, although, in general, these effects have been minimal following chlordiazepoxide HCl overdosage. General supportive measures should be employed, along with immediate gastric lavage. Intravenous fluids should be administered and an adequate airway maintained. Hypotension may be combated by the use of norepinephrine or metaraminol. Dialysis is of limited value. There have been occasional reports of excitation in patients following chlordiazepoxide HCl overdosage; if this occurs barbiturates should not be used. As with the management of intentional overdosage with any drug, it should be borne in mind that multiple agents may have been ingested.

Flumazenil, a specific benzodiazepine-receptor antagonist, is indicated for the complete or partial reversal of the sedative effects of benzodiazepines and may be used in situations when an overdose with a benzodiazepine is known or suspected. Prior to the administration of flumazenil, necessary measures should be instituted to secure airway, ventilation and intravenous access. Flumazenil is intended as an adjunct to, not as a substitute for, proper management of benzodiazepine overdose. Patients treated with flumazenil should be monitored for resedation, respiratory depression and other residual benzodiazepine effects for an appropriate period after treatment. The prescriber should be aware of a risk of seizure in association with flumazenil treatment, particularly in long term benzodiazepine users and in cyclic antidepressant overdose. The complete flumazenil package insert, including CONTRAINDICATIONS, WARNINGS, and PRECAUTIONS, should be consulted prior to use.

Because of the wide range of clinical indications for chlordiazepoxide HCl, the optimum dosage varies with the diagnosis and response of the individual patient. The dosage, therefore, should be individualized for maximum beneficial effects.

For the relief of withdrawal symptoms of acute alcoholism, the parenteral form is usually used initially. If the drug is administered orally, the suggested initial dose is 50 to 100 mg, to be followed by repeated doses as needed until agitation is controlled — up to 300 mg per day. Dosage should then be reduced to maintenance levels. .

Dispense in a tight, light-resistant container as defined in the USP, with a child-resistant closure (as required).

KEEP THIS AND ALL MEDICATIONS OUT OF THE REACH OF CHILDREN.

This Medication Guide has been approved by the U.S. Food and Drug Administration Issued: 8/2016 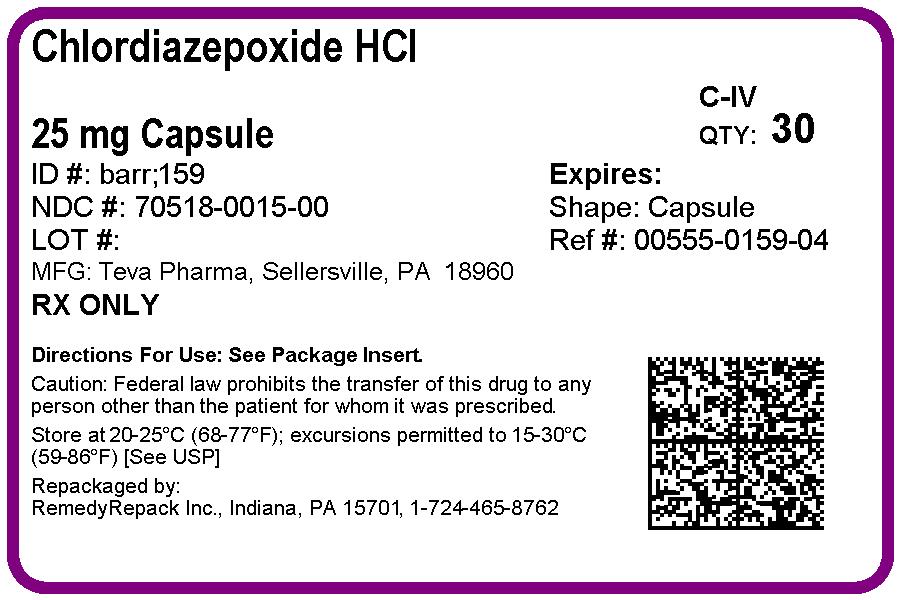 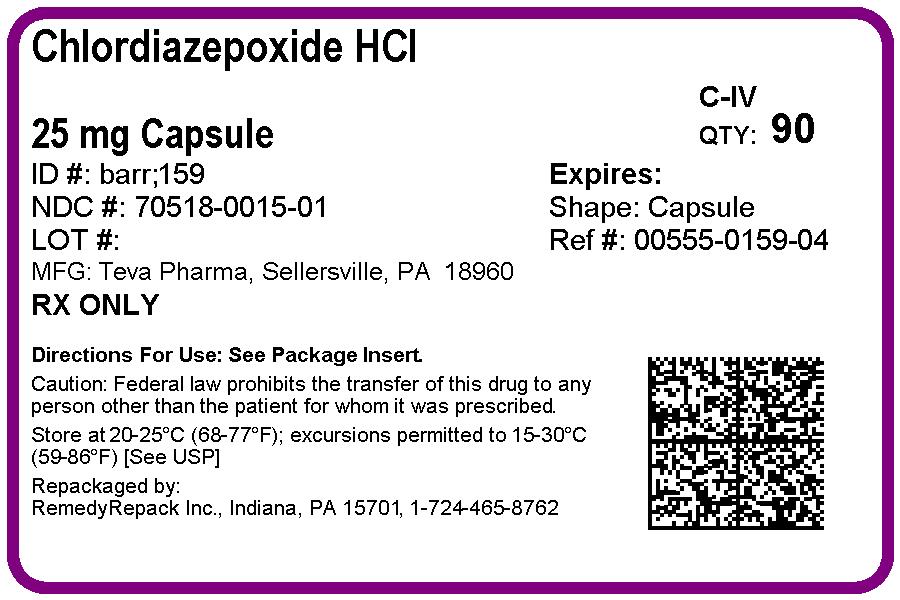